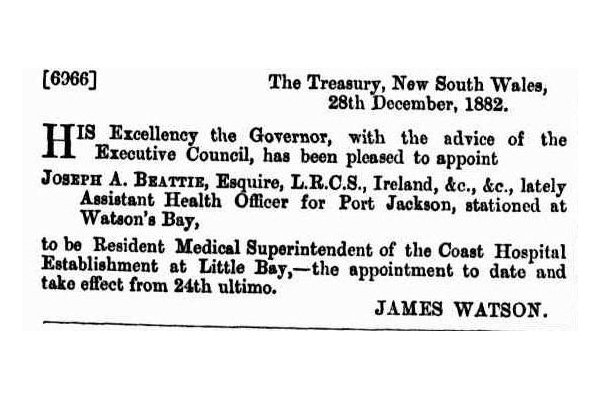 With the end of the Smallpox epidemic the Coast buildings stood empty for a short time.

During the next two years, there were periods of months when the Coast Hospital buildings were empty of patients.

In August 1882 the A.S.N. Company’s S.S. Gunga arrived at Port Jackson with a case of smallpox on board. Notice was given to the Committee, which emptied and handed over the hospital for the quarantine of those on the ship.  At the close of 1882 the Government reappointed Dr. J. A. Beattie as Medical Superintendent in charge of the hospital, which had stood empty since the removal of the Gunga sick. It remained empty until March 1883, when the S.S. Menmuir arrived with several passengers suffering from smallpox who were quarantined at the hospital.

Following this, the transfer of a few convalescents from Sydney Hospital was resumed. The Medical Superintendent appointed by the Government remained in charge, and all expenses were borne by the Government.