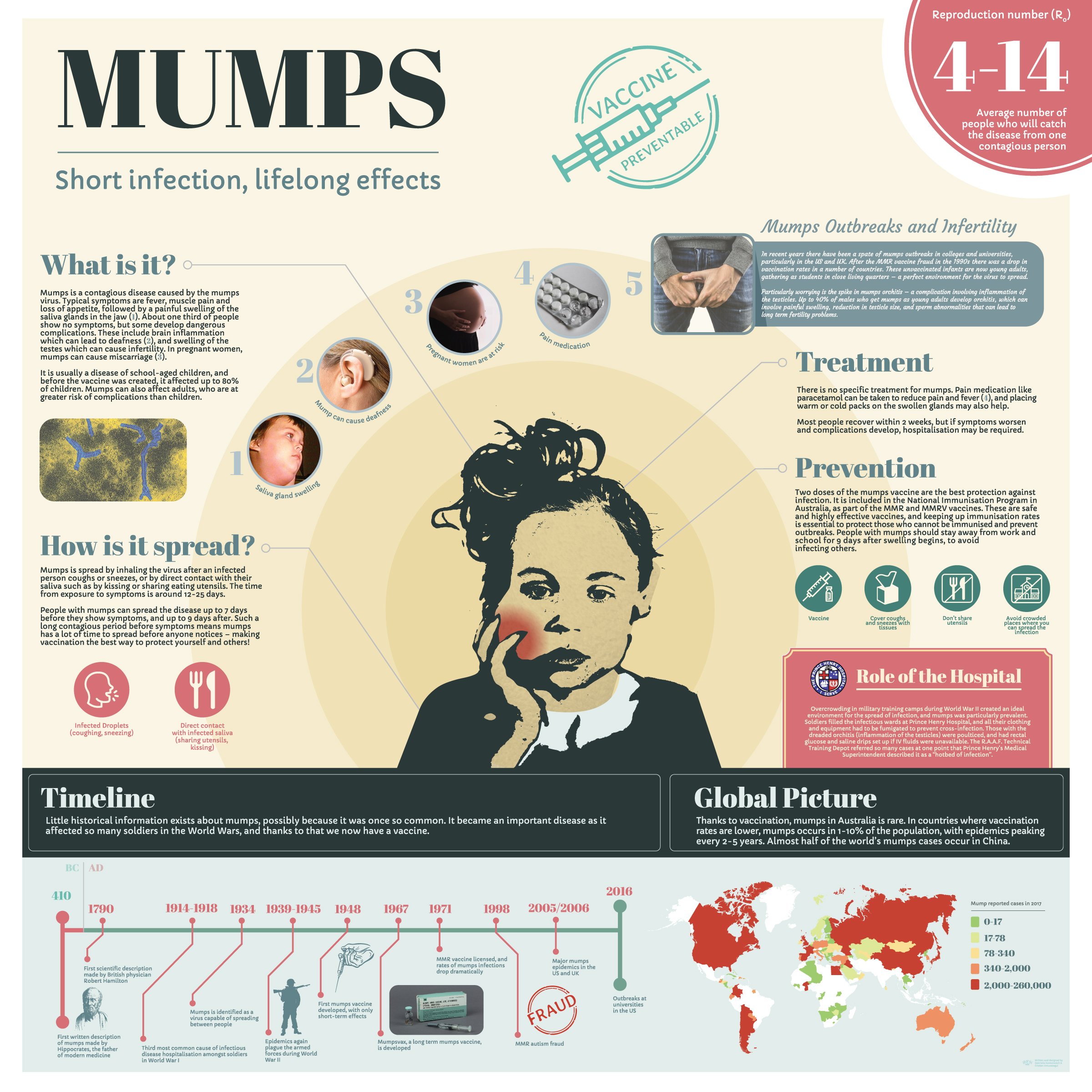 About one in 200 children with mumps will develop brain inflammation. Mumps can also damage nerves, which can lead to deafness. In pregnant women, mumps can cause miscarriage during the first three months of pregnancy.

With the outbreak of WWII the nurses at Little Bay found themselves nursing servicemen not from the battlefield but from the overcrowded induction camps which provided ideal conditions for instant epidemics of scarlet fever, mumps, measles, chicken pox, encephalitis, meningitis and a variety of other diseases. Military health services were minimal. Prince Henry Hospital was called upon to fulfil the statutory obligation in its incorporating Act which was to provide 300 beds for infectious patients in the event of an emergency. At times the influx from the camps exceeded this number and in order to keep at least 200 beds for civilian patients every available space was used; eg the old military wards now called the “Bush” and all verandahs in the general and infectious divisions.

We were flooded with epidemics. The 6th Division N.S.W. filled our infectious wards with mumps. When the first troopships were leaving Sydney some of our patients who had absconded from the wards were picked up by the military police as they tried to board the ship with their mates. Their swollen jaws betrayed them. We had to comfort them as the convoy assembled offshore in full view of the hospital. The country boys were susceptible to all the children’s infections which were endemic in the city.

When the Queensland 6th Division was moved to Ingleburn we had waves of soldiers admitted with mumps, measles, encephalitis and meningitis. The hospital switch would ring about ten minutes before eight o’clock in the evening to announce we would receive ten or more admissions immediately. The poor sick boys would arrive in trucks in full military gear, rifles, etc., having been kept at the Showground all day, hungry, sick and in pain. There was no way the day staff could go off duty and leave the small night staff to deal with an influx of admissions. We took their temperatures; if under 101 degrees, they could have a otherwise they were sponged. Medical histories had to be taken, all their clothes and equipment listed and placed in the fumigation room and then those that could eat had to be fed.

We poulticed mumps patients with the dreaded orchitis, inflammation of the testicles] (the “wrong-end” mumps,) set up rectal Glucose and Saline drips when no doctors were available to give intravenous ones and tried hard to stop them developing complications which would keep them in hospital for months.

Tha Australian Government has a comprehensive vaccination program for most childhood diseases.