Following the Great War came the extraordinarily virulent influenza pandemic which swept the world, carrying off, it has been estimated, something like 20 million people, more than died in the war itself. It is thought that the usual strain of influenza virus underwent a mutation to a highly dangerous variant. Certainly Australia had influenza in the community during 1918, but this was not severe and was nothing like what followed. The pandemic was raging overseas at the end of 1918 but Australia was not immediately affected. It is not known whether the epidemic which made its appearance here in late January 1919 was a lighting up of the virus already present or was an importation from overseas. 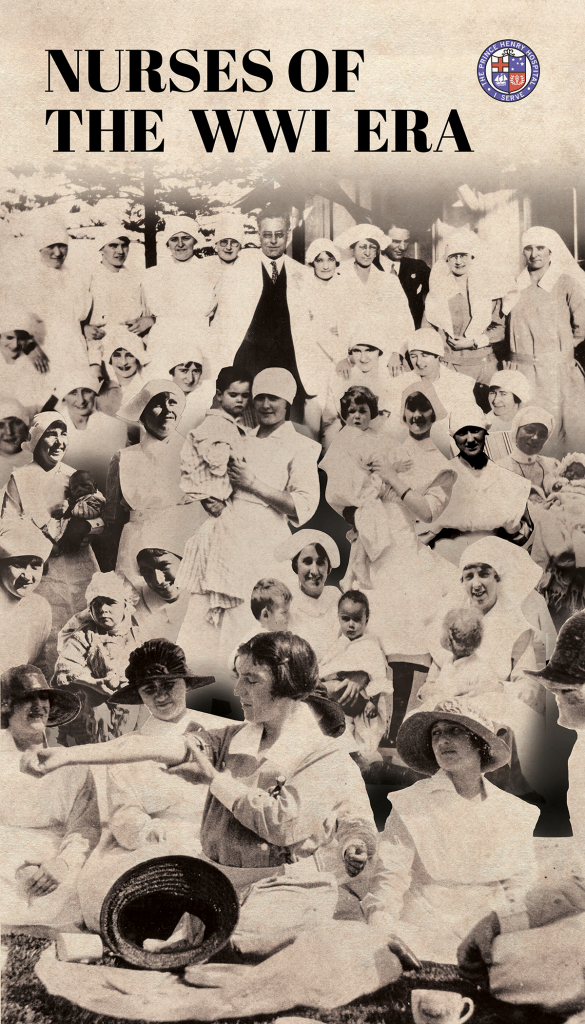 During the four years of the Great War six honorary medical officers, nine resident medical officers, eighty-nine of the nursing staff and nine of male staff were on active duty overseas. Dr. T. S. Frizell was killed in action, and Sister Blake died when the hospital ship Glenart Castle was torpedoed in 1917.

Seven nurses were awarded the Royal Red Cross, one the Greek Medaille Militaire and Sister Cawood was awarded the Military Medal for her courage in the care of patients during the bombing of a casualty clearing station in Calais, a most unusual distinction for a nursing sister.

In 1913 the nursing staff increased to ninety-six with Miss Watson as matron.

Throughout these war years the Medical Superintendent, Dr. Millard, was on leave with the Australian Expeditionary Forces and Dr. Donald Wallace was the Acting Superintendent. The hospital report for 1916 mentions that “an additional area of vegetable garden was opened up and the clearing, draining and cultivation of ten acres for producing green crops for cattle was carried out”.

As the hospital site covered some five hundred acres it is not surprising that use was made of the ground for vegetable growing and cattle raising. This work was initiated and directed by the hospital manager, Mr. Robert Goldrick, and largely carried out by “bob-a-day men. The hospital’s efforts at farming were quite successful. In 1929, for instance, milk production for the year was 23,775 gallons worth &1,572 10s. 8d, and the vegetable crop was 82,771 lb. worth £517 6s. 4d. 1933 saw the cIosing of the dairy and the moving of the herd to the Liverpool and Newington State Hospitals.

When the services of the “bob-a-day” men were finally terminated, the huts which had served as their quarters were used as part of the present clubhouse premises of the St. Michael’s golf course. This golf course area was a part of the original hospital grounds until 1937, as can be seen when one visits the old hospital cemetery which is now well within the grounds of St. Michael’s. Good shooting was to be had in the scrub of this area before it was cleared and tamed. The medical officers of the early days stalked rabbit, hare and an abundance of quail where St. Michael’s and the New South Wales Golf Clubs now are. Snakes of all types, black, brown, tiger and adders, were troublesome in the scrub during the summer months and their presence provided the outing with the tension of a big game hunt.

In 1913 Mr. Fred Flowers, the then Minister for Health, prepared an extensive rebuilding scheme, which included the construction of no less than twenty wards each of fifty beds, a total of one thousand new beds. The new hospital when completed to be known as “The Flowers Hospital”.

About this time the Government had spent a great deal of money in the making of sand-bricks at Botany, but the project regrettably had not caught popular fancy and the bricks were not selling. So they were dumped at the Coast Hospital, and the State sand-brick factory at Botany promptly shut down, never to reopen.

The foundation stone for the new hospital was laid by the Premier of New South Wales, Mr. W. A. Holman, on 7th November 1914, and was set on the seaward side of ward 22.

By the end of the war, six of these pavilions had been completed, representing three hundred beds. No provision had been made however for the extra nurses needed to staff these wards, so one ward was subdivided into cubicles and thereby made into nurses’ quarters; this division was called “18 quarters”.

At this stage, unfortunately, the project came to a halt (presumably the supply of sand-bricks ran out) and no more of these pavilions were built.

The rest of the pavilions planned for erection were to extend south wards from wards 2, 4 and 6 in three parallel lines. About the middle of these lines of buildings and lying to the westward, were to be the new administrative blocks and the Outpatients Department, grouped about a circle formed by a branch tramline from the Sydney-La Perouse track.

The tram was to be the main form of transport for patients and visitors to and from the city, and ambulance trams were to unload stretcher cases beneath a protective canopy jutting out from the front of the Outpatients Department over the tramline itself. As this part of the plan was never carried into effect, the loopline was only used as a waiting place for those trams bringing visitors to the hospital.

This area of the hospital would ultimately, it was thought, be used for buildings to house student facilities, including lecture theatres, and some four acres were being set aside as a natural flora reserve for native plants of the area, some of which are unique.

The work on this area will be directed by Dr. R. Bartholomew, chief hospital biochemist, who has been associated with the hospital since 1927.

During the war years four pavilions of wood and corrugated iron, wards 24 to 27, were erected by the military authorities for the accommodation of infective cases occurring amongst returned soldiers. Each of these units contained twenty-five beds, narrow Army type. This brought the total number of hospital beds with the addition of the six new pavilions of the Flowers Hospital in 1920, to 716, of which 502 were for general medical and surgical cases, 192 were for infectious diseases and the lazaret contained twenty-two beds.

The steadily increasing pressure of work was due not only to an expanding population in Sydney, but also to improved transport in the form of new motor ambulances, which encouraged many non-infectious cases to be admitted to the Coast, and to the electric trams which facilitated visiting.

The “military wards” were used for their original purpose for about a year; subsequently they were used to house influenza victims during 1919 and 1920, and in 1925 they were handed over by the Army to the State to be used for infectious cases occurring in the metropolitan area. Eventually these wards, having been used over many years for the nursing of infectious cases and later, convalescent diphtheria and polio myelitis sufferers, were renovated for use as animal breeding and holding houses.