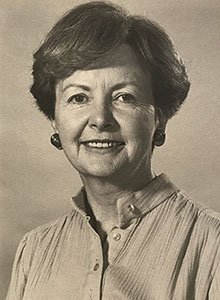 Her term of office as Director of Nursing would coincide with the quickening of the organised movement towards a radical reformation of the profession in N.S.W. She would play a leading role in that movement which would continue when she was appointed Principal Director of Nursing of P.HH and P.O.W. teaching hospitals group in February 1979

Phyllis Newcombe from Maroubra, Sydney began her training at Sydney Hospital in 1945 motivated by the usual desires-succour suffering humanity, a need for independence and to travel.

She completed her training in 1949, gained a midwifery certificate at the Women’s Hospital Crown Street, and began her journeying overseas.

Three years were spent in Britain working in various hospitals and exploring the United Kingdom and Europe. These were followed by two years spent in exotic New Guinea at hospitals in Lae, Rabaul and Port Moresby

It was an engrossing encounter with an emerging third world people and with the tropical diseases that thrived in the hot steamy atmosphere. In the end it was the climate that decided Phyllis Newcombe to hang up her rucksack and go home.

She returned to Sydney Hospital as a Ward Sister to find the nursing scene was not quite the same. The prosperous postwar years had extended the expectations of most people, particularly women; a process of change was evident which although not defined was unsettling. She left the hospital milieu to try private industry, working for two years in a pathology unit where hours were normal and the pay higher. The work was interesting but not challenging enough to keep her away from where the action was-in the hospitals.

In 1967 she enrolled for a Diploma in Nursing Administration course at College of Nursing. The range of study involved and the contacts made at the College widened her perception of the unlimited future of the nursing profession, the horizons of which she perceived extending far beyond the restricted areas of the past and present.

There was a growing recognition that nurses had abilities beyond ward supervision, which was demonstrated when the Board of Sydney Hospital appointed her an Assistant Director of Nursing assigned to the planning committee of the new Sydney Hospital.

Phyllis Newcombe was the first official Nurse Planner appointed in N.S.W Her commission was to plan the layout of wards and facilities in order that nursing care and medical procedures be carried out smoothly and efficiently with maximum Comfort for the patients. Her years of practical experience combined with aids, such as time and motion studies and her ability to clearly articulate her ideas to the other experts involved, (architects and engineers) made her a respected member of the planning team.

It was a demanding. but stimulating task; unfortunately the plan was not implemented. The Government decided not to go ahead with the new hospital. She was disappointed but considered the whole exercise had been worthwhile; a valuable precedent had been established by including a nurse in the planning team. She was appointed Deputy Director of Nursing at Sydney Hospital responsible for the education content of training

In 1970 she married Edward Newnham, a solicitor. In 1972 she happily retired from Sydney Hospital and nursing with high expectations of a new and fulfilling life with her husband; sadly that was not to be, Edward Newnham died suddenly that year.

On 15th January 1973 Phyllis Newnham was appointed Director of Nursing at Prince Henry Hospital, Little Bay. She recalled in 1987 that:

It was an unexpected opportunity to return to the workforce as the Director of Nursing of a leading hospital. There seemed to have been an unusually high turnover of Directors of Nursing at P.H.H. following Miss Hope Croll’s retirement. I would remain at P.H.H. for six years before succeeding Miss Vera Adderley as Principal Director of Nursing for the P.H P.O.W. University Teaching Hospital Group, a position I still hold. I had no idea when I arrived at Little Bay how deeply I would be involved in the reformation movement sweeping the nursing profession.