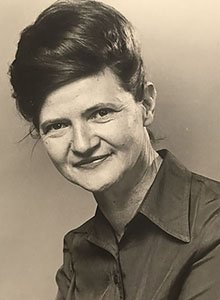 Mrs Joan Englert, was appointed the Sixteenth Matron of The Prince Henry Hospital in February 1979. She was given the title Director of Nursing.

Joan Englert nee Blane was a self proclaimed “workaholic”. Her slight build belied the intense intellectual and physical strength she brought to every task, be it work or a leisure pursuit.

Joan completed her general training at the War Memorial Hospital, Waverly, and her midwifery certificate at the Royal Hospital for Women, Paddington. For a time she specialised in theatre work, gaining a Certificate from the N.S.W. College of Nursing in Operating Theatre Management in 1964 and a Certificate in Infection Control and Management at the N.S.W. College of Nursing Technical College, Ultimo in 1977.

At Tertiary level she completed the Diploma in Nursing Administration from the Cumberland College of Advanced Education, and a Bachelor of Health Administration and a Master of Science and Sociology from the University of N.S.W.

From 1979 Mrs Englert was a Nurse Surveyor of the Australian Council of Health Care Standards and from 1985, the Preceptor for N.S.W, AC.T. and Queensland for Nurse Surveyors, which means that she recommended the selection of new surveyors and monitored their performance. In June 1990 Mrs Englert was appointed President of the NS.W. Nurses Registration Board, the Government authority which controls and regulates nursing standards.

It might appear that Joan Englert pursued her career to the exclusion of all else which was not the case. She had enjoyed a happy compatible marriage which sadly came to an end when her husband, Jack Englert died after a long illness.

Throughout the Eighties the direction of the Nursing Division was intimately bound to the insight and caring of Joan Englert, the 16th Director of Nursing at the Coast-Prince Henry Hospital. As did each Matron or Director in the long line of leadership that began in 1881, she continued to build on the work of her predecessors always with the aim of improving the excellent reputation of her hospital and the nursing staff. Mrs Joan Englert wrote in June 1990

Plus la change, plus c’est le méme chose” (The more things change the more they are the same.) This quote written by Alphonse Kass, a French writer in 1849 illustrates the ever revolving circle that surrounds us in the health services.
It is important for the Director of Nursing of a major teaching referral hospital to understand and be aware of … external forces in order to use strategies to overcome the difficulties they present to efficient organisation and management.

It was only a decade ago that I, as the newly appointed Director of Nursing, was asked to join the Planning Team for the redevelopment of Prince Henry on its present site. A master Control Plan had been developed and the Functional Brief completed.

For a new Director of Nursing the challenge was wonderful. The patient units could be designed to reflect the concept of self-care and patient education and the nursing process could be planned to allow time-saving elements to be included.

It was a bitter blow for all the staff when the project was suddenly stopped. The economy had intervened, there was no money and the Western Area of Sydney was growing rapidly and required extra financial input and more services.

Disappointments cannot be allowed to interfere with the delivery of services. The staff across all divisions of the hospital doubled their efforts to work as a team to ensure that the integrated care from each health professional maintained its excellent quality in the process and outcome of patient care.  The spirit of all previous pathfinders enhanced the strength and determination to preserve the hospital. It was believed that Prince Henry’s turn would come.

The years between 1984 and 1988 experienced twelve threats to the continued existence of the hospital. The threat of closure impacted on the hospital in many ways. New management was now in control and a programme of refurbishment was begun. All health workers were invited to preserve the integrity of the clinical units. Industrial activity was mobilised immediately by the Unions at the first sign of a new threat. Promises were made by the government of the day to assure the workers that the hospital would not close.

During these years Prince Henry received its second and third Accreditation three year status with the Australian Council of Health health Care Standards (A.C.H.S.). This award in itself proved to the health system that the services delivered at the hospital had met the Australian Standards set by professional bodies.

How in the light of these Awards could any doubt be thrown on the efficiency and effectiveness of the hospital’s role in the delivery of health care, and its obvious meeting of the demand for health care by the people of New South Wales?

This decision was the result of a feasibility study commissioned by the Eastern Sydney Area Health Board to investigate the future development of the Prince Henry, and the Prince of Wales hospitals.

It demonstrated that relocating the Prince Henry Hospital to the Randwick site… would bring both hospitals together and would allow increased efficiencies in the delivery of health care. The clinicians [doctors] in both hospitals supported this new initiative as it would bring the hospitals on one campus close to the University of New South Wales and the Medical Faculty.
The decision created industrial unrest for the Prince Henry Hospital as hospital and allied Health and nursing staff did not agree that this relocation was an important factor in improving health care and would have preferred to continue with refurbishment on the present site for less capital cost. One argument for the move was based on the duplication of support services that exist on both sites and the considerable saving of operating costs if they were together on one site.
So one decade later Prince Henry was part of a redevelopment Master Control Plan and Functional Brief.

The cycle had revolved yet again but this time the agenda was to be a relocation to the campus at Randwick.
The hospital was not to close and its clinical excellence with its Super specialities was to be preserved at Randwick. How could the Director of Nursing deal with the uncertainty and turbulence within the hospital created by the relocation decision and still maintain the delivery of high quality patient care? Not easily! It required the setting of a strategic plan that would give stability and direction into the future, as well as remaining cool, calm, and collected and concentrating on the job in hand.

It was also necessary to look at the organisational structure within the Nursing Division and move away from the traditional hierarchical line positions and to prepare for a decentralised matrix. It was most important to prepare the Nursing Unit Managers on budgeting so that they would be able to expand their role when separate clinical modules were introduced.
Clinical Service meetings were set up with the Clinical Department Heads, Nursing Unit Managers, Allied Health practitioners and the Executive to encourage an integration of the professional teams and create a more collegiate relationship between health workers.

It is an exciting time for nurses who are dedicated to health care as flexibility and creativity are encouraged at Prince Henry.
On the negative side is the continuing shortage of registered nurses to support the system.

The future is still undefinable but one thing is certain and that is the importance of pressing onwards, of exploring new ideas and not to allow one’s vision to be clouded.

We are in a time of incredible change and yet the reason for being a nurse is still the same, to give service to those who need it.

The fundamental purpose of nursing has not changed!

In 1993, Joan Lillian Englert was awarded an AM and became a Member of the Order of Australia in recognition of service to nursing and to the development of professional standards and codes of behaviour.