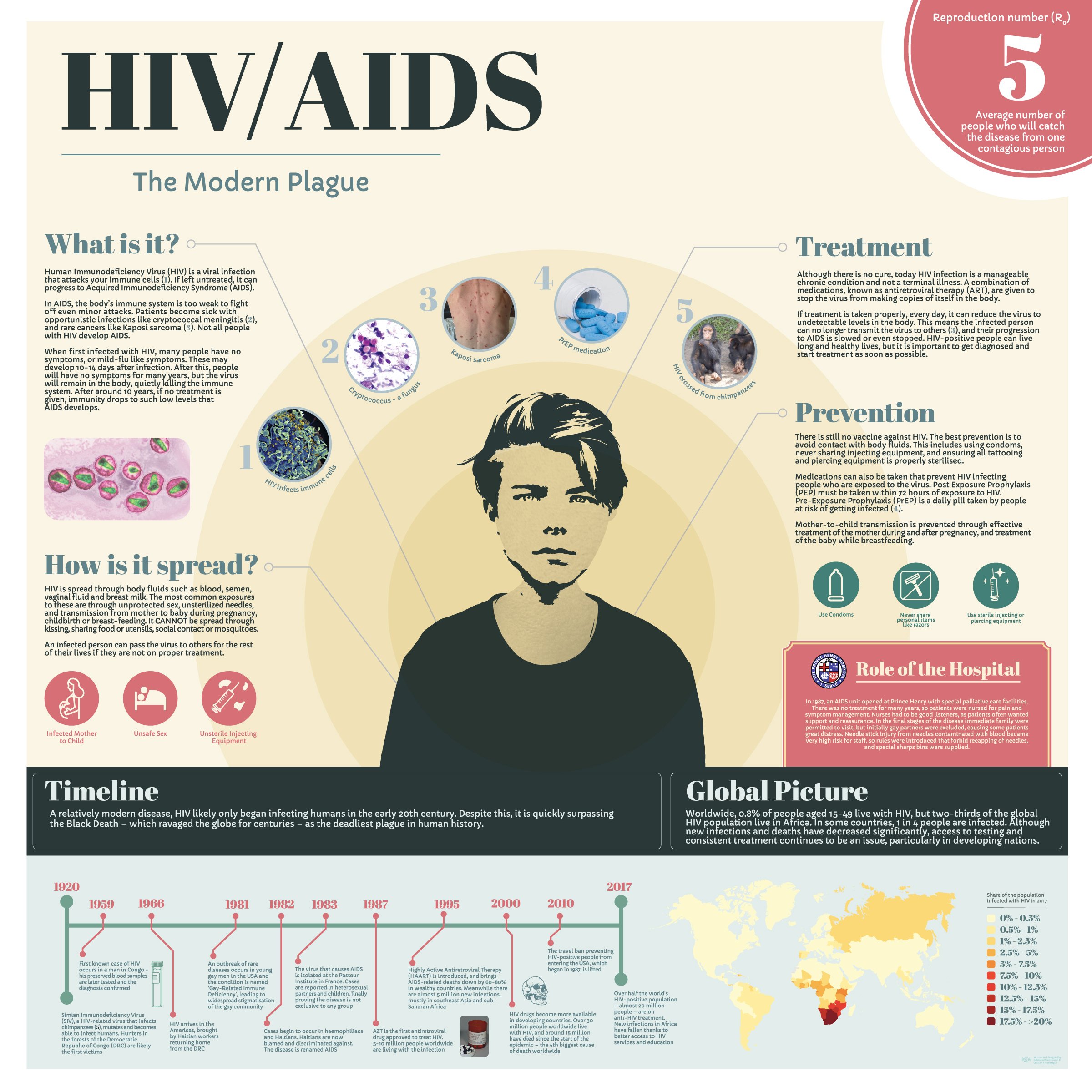 Human Immunodeficiency Virus (HIV) came to prominence as a disease in the late 1970s. The origin of the infection has been a subject of debate since the virus itself was identified in the 1980s but the current consensus is that virus made the leap from monkeys to humans some time in the early in the 20th century.

HIV is a type of lentivirus, which means it attacks the immune system. Researchers found that HIV is closely related to a similar virus present in primates – Simian Immunodeficiency Virus (SIV) In 1999, researchers discovered a strain of SIV (called SIVcpz) in a chimpanzee that was almost identical to HIV in humans. Using the earliest known sample of HIV, scientists were able to create a ‘family-tree’ ancestry of HIV transmission.

Their studies concluded that the first transmission of SIV to HIV in humans took place around 1920 in Kinshasa in the Democratic Republic of Congo. This region is known for having the most genetic diversity in HIV strains in the world, reflecting the number of different times SIV was passed to humans. Many of the first cases of AIDS were recorded there too.

Kinshasa is a hub of transport links, such as roads, railways and rivers. The area also developed a thriving sex trade around the time that HIV began to spread. By 1937, HIV had reached Brazzaville, about 120km west of Kinshasa. The lack of transport routes into the North and East of the country accounts for the significantly fewer incidents of infections there at the time.

In the 1960s, a subtype of HIV-1 (called subtype ‘B’) made its way to Haiti, carried by Haitian professionals working in the Democratic Republic of Congo. These people were initially blamed for the global HIV epidemic, and suffered severe racism, stigma and discrimination as a result.

In 1981, doctors in in New York and California began to report a rise in cases of rare diseases, such as Kaposi’s Sarcoma (a rare cancer) and a lung infection called PCP, among gay men. The reason these cancers and opportunistic infections were spreading was a mystery, but researchers hypothesized an infectious ‘disease’ might be the underlying cause.

At first the disease was called all sorts of names relating to the word ‘gay’. It wasn’t until mid-1982 that scientists realised the ‘disease’ was also spreading among other populations, such as haemophiliacs and heroin users. By the end of the year, the ‘disease’ was officially named AIDS – Acquired Immune Deficiency Syndrome.

In 1983 the HIV virus was isolated and identified by researchers at the Pasteur Institute in France. Originally called Lymphadenopathy-Associated Virus (or LAV) the virus was eventually confirmed as the cause of AIDS, when scientists working at the USA National Cancer Institute isolated a virus they called HTLV-III. LAV and HTLV-III were later acknowledged to be the same pathogen.

It soon became clear that those most at risk of the disease were gay men, hemophiliacs, injecting drug users and, in the early phase of the epidemic, people fro Haiti. Those infected became subject to stigma and vilification.

AIDS councils were formed in South Australia, Victoria and Western Australia in 1983, and in New South Wales, Queensland, Tasmania and the Australian Capital Territory in 1985. The state and territory AIDS councils, along with the other national peak organisations representing at-risk groups-Injecting & Illicit Drug Users League (AIVL), National Association of People with HIV Australia (NAPWHA), Anwernekenhe National Aboriginal and Torres Strait Islander HIV/AIDS Alliance (ANA), the Scarlet Alliance, and the Australian Federation of AIDS Organisations – all contributed to the Australian response.

Several NGOs formed and have remained prominent in the public health fight against HIV-AIDS. These include the AIDS Trust of Australia (1987), The Victorian AIDS Council (VAC-1983), and the Bobby Goldsmith Foundation, which was founded mid 1984.

The Bobby Goldsmith Foundation is one of Australia’s oldest HIV/AIDS charities. The Foundation is named in honour of Bobby Goldsmith, an athlete and active gay community member, who won 17 medals swimming for Australia at the first Gay Olympics, in San Francisco in 1982, and was one of Australia’s early victims of the disease.  The Foundation had its origins in a network of friends who organised care for Goldsmith, to allow him to live independently during his illness. He died in June 1984. This approach to supporting care and independent living in the community continues to be the basis of the Foundation’s work.

In the early days stigmatization of those with HIV was not confined to traditionally marginalised groups.

In 1985, a small child who contracted HIV/AIDS through a transfusion of infected blood was denied a place at a local pre-school because she was HIV Positive. Eva Van Grafhorst was born prematurely in 1982, and required eleven blood transfusions to save her life. One of the transfusions was contaminated, and Eve contracted HIV.  She was eventually permitted to attend a local school, provided she wore a plastic face-mask at all times; some parents suggested this was not sufficient, and that the van Grafhorsts should leave town, which they were eventually forced to do. The family moved to New Zealand in 1986. In stark contrast to their experience in Australia, they were welcomed into the community and Eve lived a relatively normal life, attending a local school without incident. In 1992, after Eve’s story was featured in international media, she was awarded the Variety Gold Heart Award and, on her tenth birthday, received a letter from and autographed photograph of Diana, Princess of Wales. Eve Van Grafhorst died in 1993, at the age of 11.

In 1984 The National AIDS Task Force, and a National Advisory Committee on AIDS (NACAIDS) were established to advise the federal government. Ita Buttrose was appointed to chair NACAIDS, which included government, community, and medical representatives.

In the mid-1980s some state governments began to pilot needle exchange programs to reduce the transmission of HIV amongst intravenous drug users. While somewhat controversial, these programs have been crucial in keeping the incidence of the disease low, as well as being extremely cost-effective.
In 1987, the government launched the controversial ‘Grim Reaper’ public health campaign. The television commercials featured the grim reaper rolling a bowling ball toward a group of people standing in the place of the pins. The message was blunt and uncompromising and the campaign is, to this day, regarded as one of the most effective and pioneering public health advertising campaigns.

The Australian government’s use of mainstream media to deliver such a forthright message was credited as contributing to Australia’s success in managing HIV. Unfortunately the campaign also contributed to a perpetuation of stigma for those living with the disease, particularly gay men.

In November 2018, the first HIV self-test was approved. Australian research shows HIV self-testing devices increase testing among infrequent and non-testers. For the benefits of self-tests to be realised, availability needs to be expanded to pharmacies.

Today more people live with HIV than die of AIDS. According to the Australian Federation of AIDS Organisations the number of HIV notifications newly diagnosed in Australia has fallen to the lowest number  since 2010, with 963 notifications in 2017. There has been a 7% decrease in the number of HIV diagnoses in Australia in the last five years due to a decrease among men reporting male‑to‑male sex.

Since April 2018, PrEP (Pre-Exposure Prophylaxis) has been available through the PBS. PrEP is for people who may be at risk of contracting HIV, and is used to prevent HIV acquisition. As of March 2019, there were an estimated 23,020 people accessing PrEP, although 3 times as many individuals are eligible.

For people who have been exposed to the virus PEP (Post-Exposure Prophylaxis) is a month-long daily treatment designed to prevent HIV acquisition following exposure to risk.

TasP (Treatment as Prevention) is a strategy that leverages the fact that scientists now knw that there is zero risk of sexual transmission from someone on HIV treatment with an undetectable viral load. The accompanying educational strategy encourages people at risk to seek testing and treatment.

It is a testament to the power and commitment of the affected communities that, despite there still not being a vaccine for HIV, transmission rates in Australia are low and public awareness of prevention and treatment strategies is high.