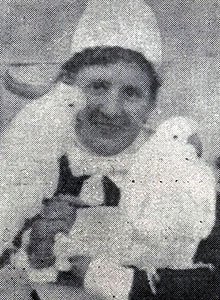 Mrs Helen Mackay, a charming, competent Prince Alfred Hospital nurse, became Matron in 1888. She kept pet cockatoos, a vogue with Matrons at the time. She proved to be an excellent Matron, highly regarded by patients, doctors and nurses. She would remain in charge for three years, resigning in March 1891.

During her first year as Matron she recommended that one of the male nurses Chas G. Willman, be appointed Chief Wardsman and Clerk.

Horse drawn ambulances were an integral part of the health system at the Coast. It was mandatory that a nurse should accompany the driver whenever patients were being transported.

This duty was not without its hazards as the Government report of 1889 shows:-

A serious ambulance accident, in which one vehicle was wrecked and a nurse severely injured, also added to the cost [of ambulance service].

It was a frequent and regrettable feature of much 19th century reporting that damage to property took priority over injury to persons, in this instance, the unnamed nurse. She was Alicia Hacgon, who joined the staff in April 1884. Alicia recovered, resumed duty but was exempted from further ambulance work.

The nurse on the ambulance sat beside the driver. The roads were rough and there was no protection from the weather. She would travel inside the ambulance with the patient or patients, when necessary, but all the nurses agreed it was better to ride outside.