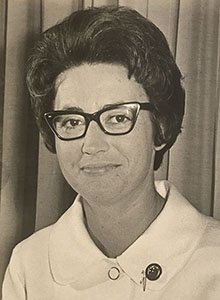 Marie Kilkeary had commenced training in September 1955 a few weeks before her 18th birthday. Bright, conscientious and energetic she found that caring for sick people was satisfying, the study hard but stimulating and that the recreational facilities at Little Bay alleviated the tension of ward work. She responded to the responsibility expected, but was sensitive to injustice real or perceived, speaking her mind when she considered it warranted.

After completing a Midwifery Certificate at St Margaret’s Darlinghurst she joined the Rockdale Community District Nursing Service which widened her knowledge of the health and social needs of the community as a whole, especially the infirm aged.

In 1963 she returned to P.H.H as a surgical ward sister which involved supervising the nursing care of patients and instructing the student nurses. She commented:

I believe I was considered strict but the nurses didn’t seem to resent that very much. Most students wanted to learn. There was a great deal of extra-curricula activity available to the student body. In 1964 Prince Henry had joined the Student Nurses Unit of the A.T.N.A.which had been established to promote fellowship in the nursing profession through social and cultural activities such as inter-hospital debates, swimming carnivals, golf tournaments, tennis competitions, the Student’s Union Ball and much more.

In 1966 Matron Adderley had encouraged the forming of a Student Nurses Council at P.HH. which was composed of two representatives from each class elected yearly. The Council’s 30 odd members met monthly. The aim was to provide an avenue for the student nurses to articulate their concerns directly to nursing administration through a staff liaison officer. I was for a time the liaison officer attending every monthly meeting and helping sort out some of the problems. It was good experience for the nurses involved and I enjoyed working with them.

The industrial union, the New South Wales Nurses Association was also gathering support with the formation of a P.H.H. Branch in 1966. The nurses award campaign in 1967 activated the student body and mass meetings in the city were well attended by P.H.H. nurses.

Probably my biggest contribution to eficient management was putting the nursing roster system on a computer. It was quite a challenge learning how to operate the new “high tech.” machines. They were fairly primitive; at first disasters were more usual than successes. Eventually the whole roster system was computerised and the ancient chessboard with counter system was banished forever.

I was appointed Deputy Matron to Matron McKinnon in April 1969. That was a learning experience but nota traditional one. The problems created by the integration of the student nurses of two hospitals put extra strains on the primary task of supervising nursing and patient care at P.H.H. Nevertheless I was surprised to be offered the Matronship when Miss McKinnon retired.

It was a marvellous if daunting opportunity. I thought I had achieved the ultimate in my nursing career. That euphoric state did not endure. I was to find the divided command irksome. I admired Vera Adderley and appreciated that she had encouraged me to develop my abilities to their full potential but with her as Principal Director of Nursing I felt more like a Deputy Matron than the Matron of P.H.H.

I am sure this problem would have disappeared eventually when Miss Adderley had properly defined the boundaries of her authority as Principal Director of Nursing. More troubling was a feeling of deep concern for the hospital itself, the removal of facilities and the diverting of funds to build up the Prince of Wales.

I, among others, felt incensed when the Board of Directors financed the construction of a swimming pool at the P.O.W, because the nurses at Prince Henry had installed a pool next to the McNevin Home. Little Bay Beach had been badly polluted by the sewerage outfall at Malabar which was not the case when I trained. In 1970 a group of nurses decided to raise funds to build a swimming pool. We held dances, raffles, barbecues, etc. and the pool was installed while I was Matron and it hadn’t cost the hospital anything.

The nurses at the Coast/P.H.H. were always aware of the scarcity of public health funds; even a large project like the lovely Coast Nurses War Memorial Chapel was built with funds raised by the P.H.H. Trained Nurses’ Association.

It was something of a shock to find that the Board of Directors had no such scruples about providing a swimming pool at the Prince of Wales with money that could have been used for much needed medical purposes.

It seemed to me that Prince Henry was not getting a fair deal. Most of all I found I missed the direct contact with patient care. I was working hard, learming a lot about administration but I was not enjoying it and decided after much thought that this was not my scene.

I applied for and was appointed to the vacant Matronship of the Mona Vale Hospital in a northen beach suburb of Sydney. My family and friends thought I had lost my mind. I hadn’t, Mona Vale was a small general hospital with a maternity wing. The eight years I spent there were rewarding in every way. It grew rapidly and all the knowledge I had acquired as a nurse and administrator was fully used.
I had married Gordon Sharp., a businessman, in 1978 and resigned in March 1980 soon after our baby was born. I was then on annual leave and the Board of Directors generously suggested I take maternity leave instead of resigning-attitudes had changed a lot since my training days.

I deeply appreciated the Directors confidence in my work but declined the offer. A new phase in my life was beginning which I wanted to experience without the responsibility of managing a large institution which would require my complete dedication.

My nursing career had been fulfilling. I believe my training at P.H.H. had prepared me to accept and not shy away from the responsibility of leadership when it came my way. l guess I was lucky too; being in the right place at the right time gained me the privilege of becoming the Matron of my own training school, an old and famous one which in turm made me an efficient Matron of Mona Vale where I spent eight wonderful years.

1971 The 3 year nursing course makes a comeback 1971 marked the final year of the 4-year Nurses Training Certificate. From…