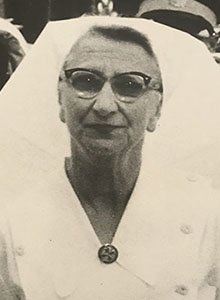 She recounts of her training and experience:

Marrickville was a family-type of hospital and I enjoyed my training immensely. I was one of a large family, used to working at home and didn’t find the life of a nurse very difficult, though I never did take kindly to the custom of rising at 5 a.m.

My first experience in nursing, I was handed a large broom and a plate of cold tea leaves which another probationer and I were instructed to scatter under beds and on the floor, then sweep up leaving no dust. The other nurse immediately made it clear that she was the senior member of the team with complete control over my work. She had joined the week before.

After completing general training I did six months private nursing and then went to Forbes District Hospital for four years before returning to Sydney to complete my midwifery certificate. I then joined the staff of Maitland Hospital as a Sister.

My first appointment as Matron was to Moree Hospital in 1935. It was a small 16 bed hospital. On arrival I was shown around by the President and the Secretary of the Board. When we reached the kitchen and I saw Golden Syrup tins being used as milk jugs I asked the President when the next train for Sydney departed. His immediate response “My Gawd Matron, you are not thinking of leaving?” I was, but his appeal was so plaintive, I relented and stayed for four years in Moree before accepting an appointment to the Armidale Hospital.

That was early 1940, I had offered my services to the Army Nursing Service and was called up in late 1941 I was appointed Matron of the fledgling military Hospital “Yaralla” at Concord in Sydney with the rank of Major. The hospital was just beginning and would expand to 2000 beds before I left in April 1945 to go on Active Service as Matron of the 2nd/9th A.G.H. Tamworth.

We were almost immediately removed to Morotai where we remained for ten months. The war didn’t last long after my arrival. I never found out who told the Japanese High Command that I was there but it was exciting to be present at the official surrender of the Japanese in the Morotai area. General Blamey entertained us to morning tea in his headquarters. I still have the cork from the champagne that was served instead of tea.

Back in “civvy street” I accepted an invitation to be Matron of Rankin Park Hospital which was being opened as a T.B. hospital for the Newcastle area. Four years later I returned to Maitland Hospital as Matron, 20 years after my term there as a ward Sister.

In 1955 hearing of Matron McNevin’s approaching retirement I submitted my name for consideration as Matron of the Prince Henry Hospital. I was accepted.

After a career of considerable variety the prospect of a position in the city in one of the state’s leading hospitals attracted me immensely and I would at last have an opportunity to concentrate on my professional activities within the nursing profession..

But, if I pictured Prince Henry as a haven of stability and rest after stormy seas-never have I been more wrong. If restful case I sought I should have left at the end of four years in 1959. I didn’t, the bomb burst.

The bomb in question was the designation of Prince Henry as the first teaching hospital for the new Medical School at the University of N.S.W. in December 1959. This coincided with the retirement of the long-time Medical Superintendent, the greatly admired Dr Cec. Walters.

The appointment of Hope Croll in 1955 was not opposed by the senior nursing staf. The one person thought to be Ethel McNevin’s legitimate successor, Deputy Matron Mary Jo O’Rourke, had applied for the position but was not resentful when Miss Croll was appointed by the Board.

Hope Croll had an established reputation as an intelligent, hard working, competent administrator. She had much personal charm, was approachable and enthusiastic but never familiar. She respected the senior sisters and they responded. In hindsight it was fortuitous that Hope Croll and Mary Jo O’Rourke were the two top nursing executives during the difficult reorganisation period which began in 1960.

For much of the time they were in complete, if not official control of the Hospital. The responsibilities they assumed were enormous; the new Chief Executive, was a senior public servant, not a doctor, and was new to hospital administration, many of the senior medical officers were unfamiliar with the hospital.

Hope Croll’s experience with the trials of setting up new hospitals was valuable and Mary Jo O’Rourke’s vast knowledge of the practices and traditions of the Coast and Prince Henry ensured that the integrity of the nurses training school was not threatened nor the high standard of patient care diminished.