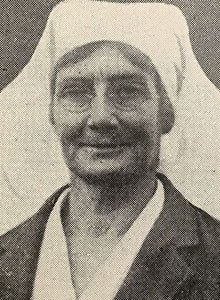 Miss Clarice Molyneaux Dickson, R.R.C., was a trainee nurse at the Coast, starting there in 1909.

She served overseas during the 1914-18 war and for many years she was sister-in-charge of the Infectious Diseases Division, later becoming sub-matron.

She was appointed matron in 1936, a position she held until her retirement from the hospital in 1937.

Clarice Dickson was born in Queensland in September 1881, right about the time the Sanitary Camp was established at Little Bay. Before enrolling at the Coast in 1909 she had gained a Mental Nursing Certificate at Callan Park.

Her Royal Red Cross gained on active service in France was awarded for courageous dedication to duty under fire.

Returned Australian Servicemen regarded her with respect and affection, one remarked that she could create a hospital anywhere as long as she had a tent an a pair of scissors.

She was an excellent nurse, a quiet controlled efficient person who instilled respect by example not by fear. Her philosophy was reflected in the comment she made when the Paymaster wished a departing staff nurse “Good Luck.” Sister Dickson’s instant response was, “Good work does not need good luck, she will do well wherever she goes, because she is a competent well trained nurse.”