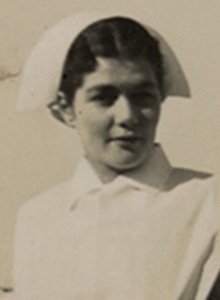 Olive Freeman Pratt trained as a nurse at Prince Henry Hospital between 1936 and 1939.

She also worked at the hospital in 1940 before transferring to King George V to pursue certification as a maternity nurse.

This is a transcript of an oral history interview.

It has been edited for clarity.

What was your first day at the Coast Hospital in 1936 like?

My mum said “you’ll probably go on in the morning”. I got out there in the middle of the afternoon and I reported to a ward and the staff nurse. They had sisters and staff nurses. Staff nurses were first year out of training. The staff nurse was sent with me over to the home with my suitcase and she waited while I changed. I’d never been in my uniform before, I didn’t know Arthur from Martha. I got dressed and she realized I was having a bit of bother and she came and helped me. I was on the ward at 4 o’clock in the afternoon and I had just arrived!

I was given to another probationer to show around and that was Thelma Secomb. I was a great friend of Thelma’s afterwards, I’ve got pictures of her there. I was on till 8 o’clock that night and up again at 6 in the morning. I hadn’t even unpacked and I didn’t even have a shower. I was tired. I think mum was a bit shocked too when she heard how things went on. I didn’t get any time off for about 7 days and then of course I went home.

I’d started with new shoes that I hadn’t even broken in and I had blisters on every toe and both heels. Dear old mum was sitting there massaging my feet with methylated spirits, “Oh it’s going to be too hard for you” she said. I said “no mum, I’ll stay, I’ll stay”. I wasn’t going to give up, but it was very hard to get the work finished that you were given to do.

Thelma showed me around for a day and a half–that day and the next day–and then she gave me this list of duties. I’d been through them with her and then they were mine. And to be able to get through it by breakfast–you had to be finished by breakfast–all your sponges, and getting your dirty laundry out, and wet laundry and big tubs with disinfectant, had to squeeze it all out, toss it down the back steps for the cart to come up and pick up. The dry laundry wasn’t so bad, but you had to go into this big bin to pour it out, separate the sheets and pillowcases and what have you, tie them up in their respective bundles. Then you’re supposed to go to breakfast at either 7 or 7:30 but I was never finished, I’d have a snack in the side room, when breakfasts were over, and just carry on, because I was always a slow-coach. I was called a slow-coach; I’m still a slow-coach. And that was one place where one of the seniors said “come on nurse Pratt, stick a pin in yourself, stick a pin in yourself”.

How long were you at the Coast Hospital? 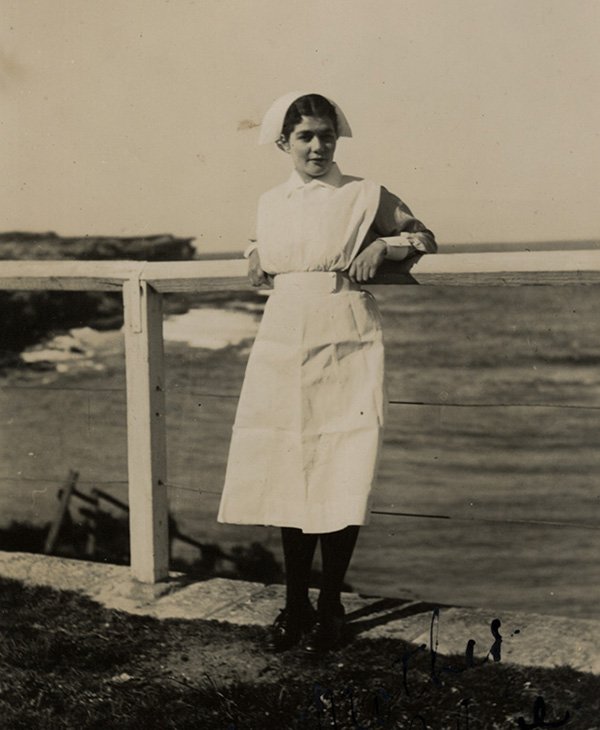 Four years. Well, I was at the Coast for five years eventually because I was privileged. I was asked back on the staff– it wasn’t everybody who was asked back, but I’d got some good jobs there. I don’t know whether it was luck or good management, but I was in outpatients. That was a privileged sort of a job, different, quite different.

And of course, I was in out-patients as a junior so I had to go down and dust matron’s office in the morning. I remember going down there one morning, and when I’d gone to breakfast I’d had a cigarette (I’d started smoking) and I had my cape on because it was cold. Matron happened to come in while I was in the middle of my cleaning, and she said “has somebody been smoking?” I said, “yes, matron”, “very dirty habit, very dirty habit” she said, but she was a dear old thing. She was the one who decided who would be asked back, according to the reports, I suppose. Of course, I was asked back and I went back.

I had a bit of a holiday. I was supposed to finish in June but I had some sick leave, you had to make up your sick leave and I had some sick leave of my own–I had a bad throat and I had chicken pox and something else, I can’t remember what it was. I was up in the sick room when I had my bad throat so I went home. Mum said “oh I think you’d better give it up, it’s going to affect your health, it’s not good.”

Your mother became ill during your final year of training. Who looked after her?

That was at the end, but it was only a couple of weeks to make up the time, because she didn’t come home for long, it was a very short illness. She went in to hospital shortly after Christmas and had an operation. They knew that it was difficult to recover from that, but she thought the pain that she was getting was because the operation hadn’t settled down. I don’t think she’d dreamt she had the cancer, because I wasn’t sure until after the operation.

I went and saw matron and said I’d like some leave to go home and look after my mother. Matron knew mum because she’d be visiting her on her rounds and she said “It’s very difficult when you’re a matron in the place, you know we’re all cogs within wheels, and if anything happens to one person it upsets the whole of the machinery” and this was me… I was causing problems. But she said “Very well nurse”.

I said “Matron, if you don’t let me go, I’ll have to leave, because my father can’t look after her”

Actually, I had no idea at that time how long mum might live, but it was only a couple of weeks before she died and the doctor left the morphia with me that I would give her as needed.

I was studying for the final exam at the Uni (back then the final nursing exams were held at Sydney University) and looking after mum and trying to remember what I was trying to learn or remember what I knew, but it was a bit difficult. Mum died in the March.

Anyway, fortunately at that time we didn’t have a preliminary training school, we went straight into the ward, as I’ve explained, but after that they got a tutor sister and kids coming to the hospital would have two weeks in the preliminary training school to get orientated, and then they’d be directed to wherever they were to go. They would still be shown around by somebody to familiarize themselves with the new working place.

Just before we went for our final, there’d been a change in matron, a change in a lot of things. They allowed our class the week in the training school, which was good, because it gave us time to practice bandaging properly on other people and, having done the theatre twice, I was able to be really familiar with all the instruments. There were cases and cases of instruments to stand and memorise. 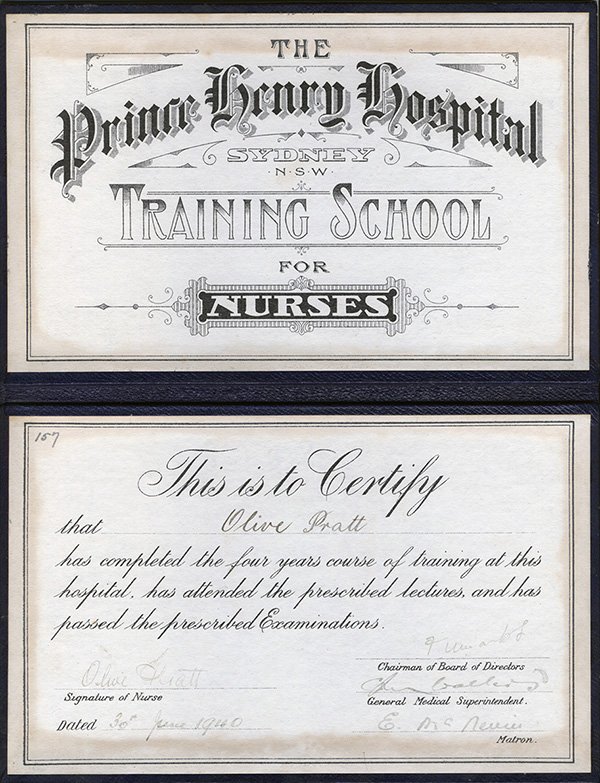 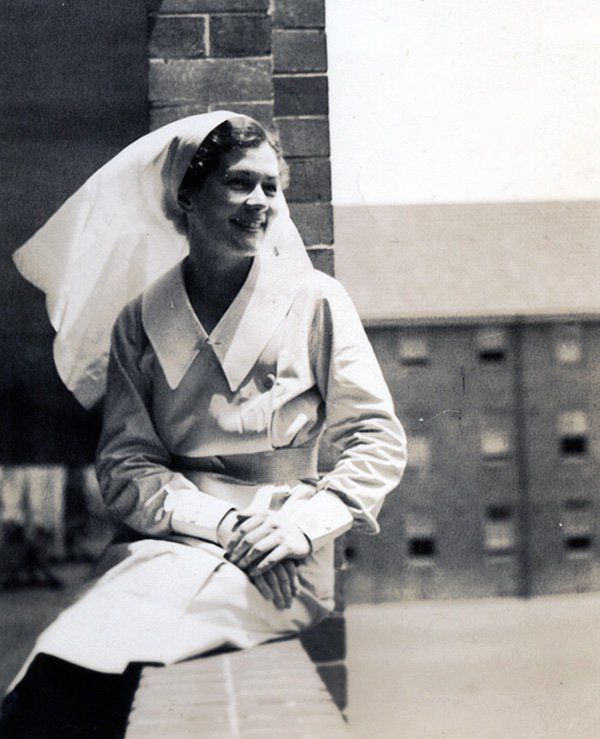 What happened after you graduated?

I stayed on at the Coast and I naively thought ‘oh, you never know, they might open a maternity section’ as I wanted to do maternity later. Being double certified was much more advantageous than single. I asked matron if could I get leave again and she said certainly, but she’d asked me back and so I stayed there for year before moving to king George V to study maternity nursing.