For decades the entry of men into the nursing profession was circumscribed by social taboos; nursing men only was acceptable, nursing women and children unacceptable. Society classified nursing as women’s work, not suitable work for men. That being said there were actually male nurses at Prince Henry Hospital from its inception, although they may have been called wardsmen.

In 1888, during her first year as Matron, Mrs McKay recommended that one of the male nurses, Chas G. Willman, be appointed Chief Wardsman and Clerk.

When Matron Watson took over in 1905 the nursing staff numbered 70, which included two male nurses. Henry Henshaw commenced in April 1902, completed his training in December 1905, and was awarded Coast Hospital Certificate No 79. He became the Senior Wardsman at the Coast. Registered at the same time was James Thomas Mackie Coast Certificate No 80.

Michael Frederick Hughes, Coast Hospital Certificate No 130, trained from 1905 to 1908. He nursed privately and in various government hospitals. He was Sanitary Inspector in Muswellbrook, Health Inspector for North Sydney, and on active service during the war.

Under Matron Burne’s administration John Edward Craig sat for “Central” (the Coast nurses name for the final A.T.N.A. examination) in 1913 and was awarded Coast Certificate No 175. John began his working life at the hospital as a kitchen hand in 1904. His formal education was limited and it required hard work and determination to qualify for registration as a 4 year general trained nurse seven years later. Sister Burne was one of his principal mentors

Craig served in the army medical corps in World War I but, unlike his female counterparts who joined the army nursing service, was not a commissioned officer. Male registered nurses entered the army as privates. On demobilisation he returned to the Coast and retired as Chief Attendant in the 1940’s.

Ward 1, the original “lock” ward, was his special province. Female nurses did not work in male venereal diseases wards at the Coast. His knowledge of venereal diseases and their treatment was valued by the medical profession.

There was little incentive for male nurses to qualify as general nurses. Hospital authorities were mostly unwilling to allow them to gain experience in nursing women and children which limited their career prospects to nursing men only.

The number of A.T.N.A. male registered nurses in 1916 was seven, three of whom held Coast nursing certificates, four were experienced nurses registered under the rule 21 provision. 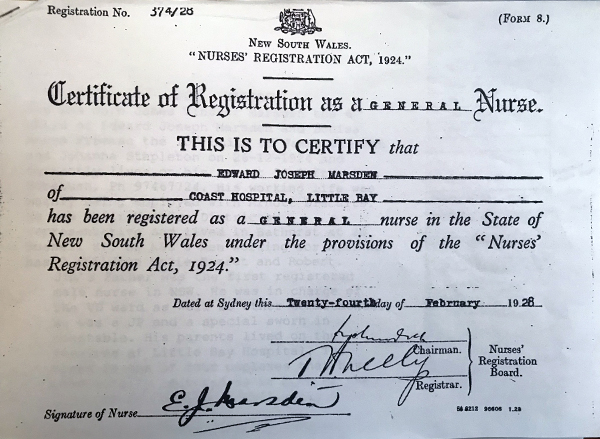 Edward Joseph Marsden also benefited from Sister Burne’s tutoring. She was Matron when he graduated in 1928. Marsden came to the Coast after a distinguished career in the Ambulance Service and remained on the staff until 1936 when he and others elected to stay with the Health Department instead of transferring to the new Prince Henry Hospital Board.

Except for the four nurses registered before 1917 male nurses were not entered in the Nurses Registers. They were responsible to the Medical Superintendent. Attendants or Wardsmen also received higher wages than female nurses.

The nursing profession itself was slow to realise that over time nurses had created a separate and expanding medical discipline requiring years of study and application (as the few brave male pathfinders discovered) which could no longer be regarded the exclusive province of women. The science and application of nursing covered a wide and diverse field in clinical and community health. It offered its registered practitioners of either sex a fulfilling and challenging career.

I had been a sick bay attendant in the Royal Australian Navy from 1961. My Navy career was terminated in 1965 because of injuries sustained in a car accident. My intense disappointment was mitigated when one of the Navy Nursing Sisters suggested I apply to P.H.H. to train as a general nurse and recommended me to Matron Croll. It seemed that an impossible dream could become a reality when Matron Croll accepted my application.

I was the only male trainee in my class but except for not living in the nurses quarters I was not treated differently. We all worked hard, heeded our superiors, went to lectures and studied.

Not long after I commenced the four year training period was reduced to three years and I so completed my training at the end of 1969. I almost immediately joined the staff, working in Ward 5 Urology and Gynecology. I was appointed Acting Nurse in Charge with Professor Murnaghan in Ward 5. I could hardly be called Sister – the title of Nursing Supervisor was adopted later, probably because it was not sexist I suppose. The trainees called me “The Mister.”

I really enjoyed my work and became active in Union affairs as the P.H.H. representative in the N.S.W. Nurses Association.

In 1974 I completed a course in Psychiatric Nursing at Glenside Hospital in Adelaide. I went on to gain a midwifery certificate from the Queen Victoria Hospital, South Australia and a Diploma of Community Health and a Certificate of Maternal and Child Health Nursing (the first held by a male nurse in Victoria) from the Lincoln Institute of Health Sciences, Victoria.

I married and returned to midwifery nursing at the Queen Victoria, South Australia. In 1982 I joined the Child, Adolescent and Family Health Service in South Australia as a relieving Baby Health Centre Nurse. During the time I have worked in this department I have studied and gained a Bachelor Diploma of Applied Science in Nursing and a Family Planning Certificate. I am a Fellow of the College of Nursing Australia and a Fellow of the College of Nursing N.S.W.

My training at P.H.H. was the beginning of a career that has never ceased being interesting. challenging and unlimited.

…had an overwhelming desire to be a nurse. This was not encouraged by my father who was in the Ambulance Corp of the Royal Australian Air Force. He thought that as a male nurse my career opportunities would be limited and the pay was poor. Nevertheless I applied to various general hospitals in Victoria where I lived, only to be told that the waiting list for male applicants was long. at least two years.
In December 1964 when I was 21, I began a general trainin course at the Seventh Day Adventist Hospital in Wahroonga. In 1966 I applied for a transfer to Prince Henry Hospital and started there in December 1966.

I commenced in the male end in Heffron Ground with Sister Deane in charge. The standard set and the discipline imposed by Sister Deane was quite a shock but I survived as most trainees did. My training schedule was the same as other nurses although my first appearance in one of the female wards excited some comment from the patients

During my four weeks term on night duty in the female infectious ward in the Marks Pavilion I was completely unaware that Sister Kilkeary at Matron’s request was monitoring the reaction of female patients being nursed by a male at night. I was informed much later that the finding had been favourable.

I preferred surgical and medical wards and really enjoyed my term in the operating theatre. My most trying experience was in the Marks Pavilion when 96 English migrant children were admitted with Diphtheria. Approximately half of them were carriers. None had been immunised in Britain.

The sick children were easy to manage but most of the carriers were not sick. They were impossible. At times chaos reigned unabated and my attempts to have some order and efficiency in the wards was continually frustrated by the little devils. They just outsmarted me.

I finished in 1969. Worked in Neurosurgery in the Royal Brisbane Hospital for two years, Theatre Supervisor in the Thoracic Unit at Prince of Wales and spent some time nursing in California.

During a two year term in Intensive Care at Sydney Hospital and a stint as a night supervisor at Royal Prince Alfred I studied part time to complete a Hospital Administration Degree at the University of N.S.W.

In 1984 I was happy to return to my favourite hospital at lovely Little Bay as a Nurse Educator and later I was appointed as an Administrative Assistant to Mrs Englert, Director of Nursing.

Geoffrey Heaton’s career ended tragically when he contracted and died from an incurable illness at Prince Henry in August 1989. He was much mourned by his colleagues and his ashes are interred in the lawn behind the Memorial Cross which stands in front of the Coast Chapel.

Do you have any photographs, documents or information relating to a relative’s service at Coast Hospital? Prince Henry Hospital Museum is always looking for artefact and ephemera for our collection. Contact the Museum Coordinator for more information.