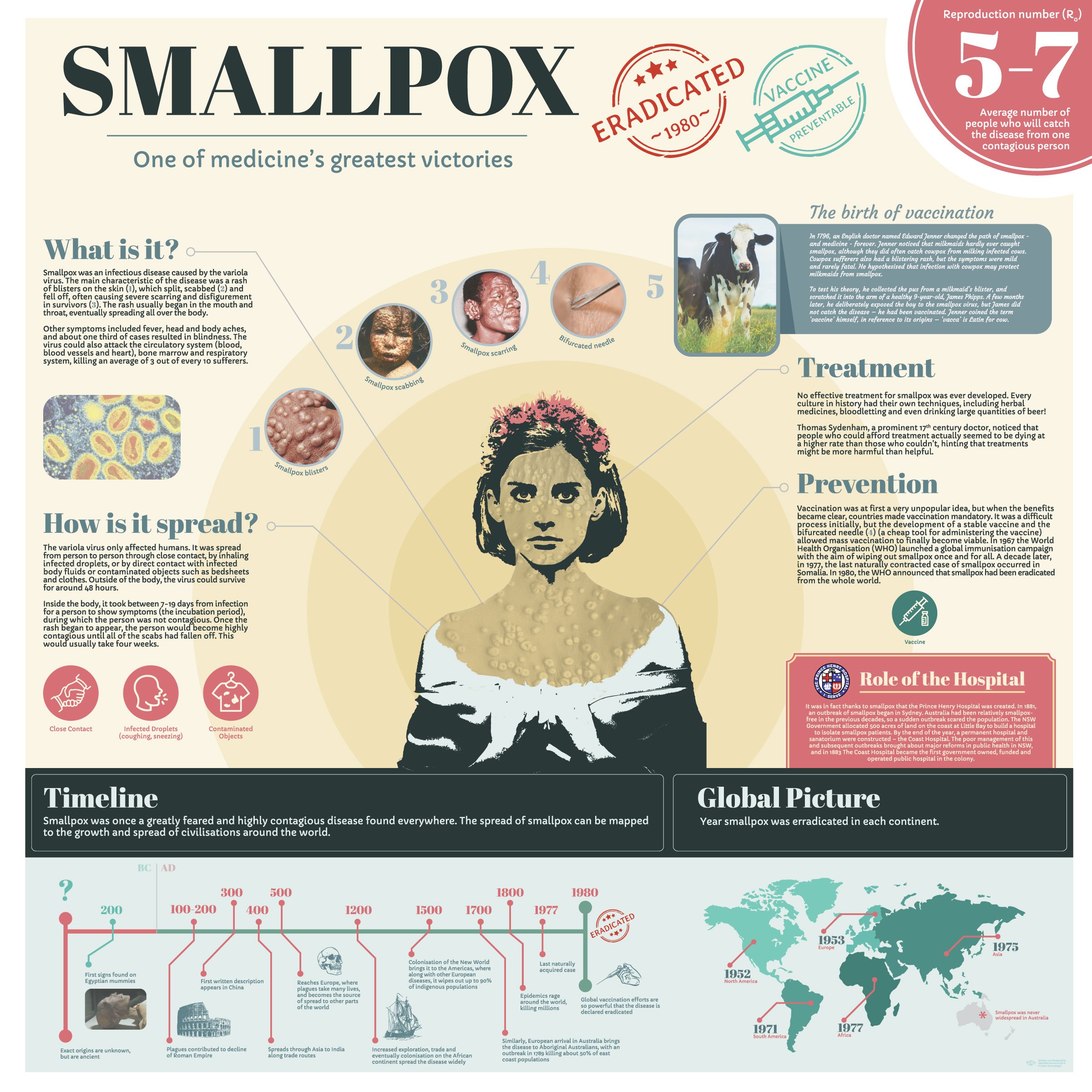 In the opinion of J. H. L. Cumpston (Director of Quarantine 1913-45, Director-General of Health 1921-45), the historian of smallpox in Australia, the disease was not known to the aborigines but was introduced into Australia by the white man.

A very extensive epidemic amongst the aborigines first came to the attention of the Europeans in April 1789, a little over a year after the foundation of the new settlement on Port Jackson. This epidemic was accompanied by a high mortality rate in the natives, whereas there were no cases among the white population. It was first indicated by the finding of many bodies of native victims in the bush about Port Jackson. Although four infected aborigines were brought to the settlement’s hospital at Dawes Point, the only case that occurred amongst the immigrants was a coloured seaman on the Supply, who died (Ford, 1955). The source of this epidemic was not known, and it caused great consternation, for smallpox, at that time unrestricted by vaccination, was rightly dreaded.

One of the best original sources for our early history is the Complete Account of the Settlement of Port Jackson by Lieutenant Watkin Tench. He commanded five detachments of marines on the Charlotte, one of the eleven ships of the First Fleet which left Portsmouth, England on 12th May 1787.

With reference to smallpox Tench wrote:

No solution of the difficulty had been given when I left the country in 1791. I can only propose queries for the ingenuity of others to exercise itself upon:

“It is true that our surgeons had brought out variolous matter in bottles, but to infer that it was introduced from this cause were a supposition so wild as to be unworthy of consideration.

The most likely explanation of this last sentence of Tench’s is that this infective smallpox material was brought by the surgeons for possible use in smallpox immunization (“variolation”). To quote Sir Edward Ford:

This method, which preceded vaccination, consisted of the application, usually to a scratch, of material obtained from the early lesions of true smallpox. An attack of smallpox resulted, with consequent immunity. Such infections were usually mild, though a mortality of from 1% to 6:% occurred. Strict isolation of inoculated patients was necessary as these were as contagious as those with the natural disease, and many epidemics were attributed to carelessness in this regard. Inoculation was introduced into England from the East in 1714, and was made popular by the vivid Lady Mary Wortley-Montagu, wife of the British Ambassador at Constantinople. The method was in restricted use in Britain until 1840, when, replaced by vaccination, it was prohibited by law. No evidence is known for the use of the ‘variolous matter in the colony, though this is a possibility.”

In the official history of the Randwick Municipality written by W. B. Lynch and F. W. Larcomb there is a quotation from Obed West, an early Australian born in Sydney in 1807:

Borbroi [Coogee] was followed by Maroubra… adjacent thereto was Long Bay, then Little Bay…. Long Bay was the principal camping place for the aboriginals between Sydney and Botany… by peculiar coincidence the native hospital for the blacks who were affected with smallpox was in the immediate vicinity of the site selected by the government for a Sanatorium for our own people (i.e. the present Prince Henry Hospital established in 1881); the blacks contracted Smallpox from La Perouse’s sailors. On the south side of the bay 200 yards back from the beach was a large overhanging rock. This was shown to me by the blacks as the place where all who had the disease went. The blacks had a great horror of the disease and were afraid to go near any who were suffering… patients were made to go into the cave, when at intervals, food, principally fish, would be laid on the ground some little distance away. Sufferers who were able would collect it and then go back to the cave. a great many died. When passing the cave, later known as the Blacks’ Hospital, I have seen numbers of skulls and bones scattered about, the remains of those who had perished in the plague.

Cleland (1911) advanced the hypothesis that the disease was introduced upon the north coast of Australia by Malay traders, pearlers and beche-de-mer (trepang) fishermen.

It seems generally agreed that the first occurrence in a European of smallpox in Sydney was in 1877 (see J. H. L. Cumpston, op. cit.), when a case was found on board the steamer Brisbane lying in Sydney Harbour. This person died, and a second case was detected among the passengers and crew in quarantine. Twelve days later, a case occurred in a small house on the wharf where the Brisbane had berthed, and then a family at Miller’s Point was afflicted, four of whom died. Altogether twelve people were infected.

The next outbreak in Sydney was in 1881, which led to the establishment of the Coast Hospital. Following this outbreak there was a lull, during which the only cases seen in Sydney were those from the Gunga and Menmuir. Then on 23rd August 1884 five cases were discovered at the Orient Hotel, Lower George Street. The disease spread, and between August 1884 and February 1885 there were in all about sixty-four cases, of whom four died. The source of this outbreak was not found. Subsequently ships from overseas brought in occasional cases and the disease was probably endemic in Sydney from 1881 to 1888.

During the nineteenth century, smallpox was rife not only in the backward Eastern countries, but also in the large European cities. It was unusually prevalent in London in 1881. It was in fact almost global in distribution. Records show that ships brought the disease to Australia, up until the early 1900’s, from England, Scotland, France, Germany, Java, New Zealand, China, Japan, Natal, U.S.A, Chile, Brazil, the Cape of Cood Hope, the Philippine Islands, Sumatra, Singapore, Port Said, Panama and the Indian ports of Colombo, Calcutta and Bombay!

The last outbreak of any significance was the particularly mild form of the disease called “variola minor” or “alastrim”. In May 1913 the owner of an underclothing factory in Chalmers Street, Sydney, employing over 200 hands, most of them girls, reported that a number of employees had, during April and May, suffered from unusual rashes which appeared to be infectious. These cases were found to be in fact cases of variola. The disease rapidly spread throughout Sydney and to country towns-Taree, Moree, Stroud, Yass, Walgett, to mention a few -and persisted from 1913 to 1918. Altogether, there were 2,400 cases in New South Wales during that time.

It was ascertained that the infection followed the arrival in Sydney of the SS Zealandia, which had sailed from Vancouver and on board which were a number of cases of the disease. This mild variety of smallpox had been endemic for some twenty-five years in the United States of America and Canada, at times breaking out into epidemics of fairly limited distribution. At about the same time that it reached Sydney, it also appeared in New Zealand, where it was probably introduced by the same ship. It caused fifty-five deaths among 1,778 Maoris infected, but no deaths among the whites.

The medical statistics for the Coast Hospital show that from 1914 to 1919 inclusive, there were between thirty to thirty-eight cases of smallpox admitted to the hospital with no deaths. Most of the cases of alastrim, how ever, were isolated and treated at the Quarantine Station, North Head.

The first clear reference to smallpox inoculation was made by the Chinese author Wan Quan (1499–1582) in his Douzhen xinfa (痘疹心法) published in 1549, with earliest hints of the practice in China during the 10th century. In China, powdered smallpox scabs were blown up the noses of the healthy. People would then develop a mild case of the disease and from then on were immune to it. The technique did have a 0.5–2.0% mortality rate, but that was considerably less than the 20–30% mortality rate of the disease itself.

Two reports on the Chinese practice of inoculation were received by the Royal Society in London in 1700; one by Dr. Martin Lister who received a report by an employee of the East India Company stationed in China and another by Clopton Havers. Voltaire (1742) reports that the Chinese had practiced smallpox inoculation “these hundred years”. Variolation had also been witnessed in Turkey by Lady Mary Wortley Montagu, who later introduced it in the UK.

One of the most successful inoculators was Thomas Dimsdale (1712-1800) a Quaker physician who practised at Hertford. News of his fame reached the Empress Catherine of Russia who forthwith sent for him to inoculate herself and her son. It was a perilous mission as can be imagined, and Guthrie describes Dimsdale’s journey to St. Petersburg, his arrangements to escape should any disaster attend his efforts, his complete success and his great reward of 10,000 pounds, a pension of 500 pounds and the rank of baron, as “one of the most romantic episodes in the history of medicine”.

With considerable relief, Dimsdale was able to write in his journal: “She has had the smallpox in the most desirable manner; which now, thank God, is over!” He inoculated almost 200 other persons in St. Petersburg and Moscow and all did well.

The discovery of vaccination was announced by Edward Jenner in 1798, about ten years after the first settlement, and within a few years the method was widely accepted. It caused great interest in the colony, and in 1803 Governor King requested the Colonial Secretary to send a supply of vaccine matter, stating that “every search has been made on the teats of our cows, but nothing of the kind can be found“.

Edward Jenner (1749-1823), one of the world’s great benefactors, lived and died in Berkeley, Cloucestershire. The idea of vaccination occurred to Jenner because of a chance remark by a dairymaid: “I can’t take smallpox, for I have already had cowpox.” The latter is a relatively mild disease transmitted from the udder of the cow to the hands of the milker.

On 14th May 1796 Jenner tried the crucial experiment. He vaccinated James Phipps, a boy of eight years, with pus from the hand of a dairymaid, Sarah Nelmes, who had become infected with cowpox. Eight weeks later, Jenner inoculated the boy with smallpox and no disease appeared.

The widespread adoption of vaccination led to a fall in the incidence and severity of smallpox, the saving of millions of lives, and the control of this most contagious disease. Vaccination introduced a new concept which led later to immunization against such diseases as typhoid, cholera, diphtheria, whooping cough and many others.

The global eradication of smallpox was certified by a commission of eminent scientists on 9 December 1979 and subsequently endorsed by the World Health Assembly on 8 May 1980.

The first two sentences of the resolution read:

Having considered the development and results of the global program on smallpox eradication initiated by WHO in 1958 and intensified since 1967 … Declares solemnly that the world and its peoples have won freedom from smallpox, which was a most devastating disease sweeping in epidemic form through many countries since earliest time, leaving death, blindness and disfigurement in its wake and which only a decade ago was rampant in Africa, Asia and South America.

Wikipedia – History of Smallpox in Australia

US Centre for Disease Control & Prevention (US CDC) History of Smallpox

1881 Smallpox outbreak in Sydney In 1881 the child of a Chinese merchant, On Chong, became ill. It was not…