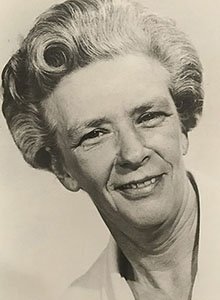 An attractive looking woman, intelligent, articulate with a lively friendly manner and puckish sense of humour, she was not exactly the stereotype image of a hospital matron, although she could and would assume that role when necessary.

Born in rural N.S. W. in 1915 she began her 45 year nursing career at Dubbo Base Hospital in 1934 and qualified for a midwifery certificate at the Women’s Hospital, Crown Street, Sydney before joining the newly established Royal Australian Air Force Nursing Service in 1941. She served overseas and in Australia resigning from the position of Second in Charge, No 3 RA.AF Hospital, Concord, N.S.W. in 1947 to return to obstetrics nursing at Women’s Hospital, Crown Street.

In addition to her work Vera Adderley began to take an active interest in the professional nursing bodies and postgraduate studies. She completed a Diploma in Nursing Administration with Honours at the N.S. W. College of Nursing.
She served as a member of the Council of the College and was later appointed a Fellow of the N.S.W. College of Nursing. It was evident to perceptive thinkers like Vera Adderley that as the career and educational opportunities for women increased, the attraction of nursing as a career diminished. There was a worldwide consensus among activist nursing leaders that the nursing profession should be reformed, its boundaries extended and enhanced or it would be submerged in the rising tide of paramedics into the health field. It was agreed that nursing education was fundamental to any remedial or innovative reforms.

Vera Adderley implemented a change in the training schedule of all the nurses who trained in the teaching hospitals administered by The Board of Directors. Her proposal was to change the traditional one hospital training school schedule to a system which would allow the student nurses to receive their practical training in all three hospitals with the Nurses’ Education Centre at P.H.H. as the central focus, i.e. the nurses would be graduates of the Nurses’ Education Centre, not, as previously, graduates of one hospital.

The school and the quality of instruction was crucial to the success of the new course which meant that the Nursing Education Centre at P.H.H. was destined to play a significant and historical role in the advancement of nursing education in N.S.W. From 1970 all student nurses from the three teaching hospitals would be graduates of the Nurses’ Education Centre of the Prince Henry Hospital, Prince of Wales Hospital and Eastern Suburbs Hospital.

In 1968 Vera Adderley was appointed to the newly created position of Principal Matron with the task of organising and coordinating nursing departments, although each hospital would have its own matron. It was a controversial, radical concept and Vera Adderley accomplished its implementation with comparative case. It could be argued that she took full advantage of the Board of Directors empire building mentality in regard to the new medical school and its teaching hospitals.

The small hospitals and their trainee nurses had much to gain by increasing their training areas. It is doubtful that in the pursuit of efficiency and in some areas self interest, the Directors of the time fully realised the long term implications of this scheme, which was to remove the traditional underpaid nurse trainee labour force from the hospital system.

Vera Adderley was a remarkable woman who made an outstanding contribution to her profession. Her managerial skills were noteworthy and acknowledged when in 1973 she became only the second woman to be appointed a Fellow of the Australian Institute of Management.

In the nursing field she held many important posts among them, Adviser on Nursing to the N.S.W. Health Commission and President of the Institute of Hospital Matrons of N.S.W. and A.C.T.

Vera Adderley had married Mr Alan Jones in 1972 which did not impinge on her nursing career and her work did not diminish the quality of her marriage. She retired in 1979 and was awarded the M.B.E. for her services to nursing.

Prince Henry, Little Bay had a special place in her affections. In her retirement, she continued to work for the hospital as the enthusiastic President of the Crystal Ball Committee, a dedicated and successful fund raising charity committee which has made outstanding financial contributions to the P.HH. facilities since 1962.

Sadly her retirement was brief. Vera Adderly died of cancer in 1984.