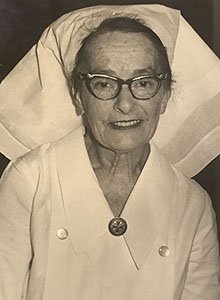 Miss Mary Josephine O’Rourke was appointed Matron of the Prince Henry Hospital on 4th November 1968 and retired on 31st March 1969 when she reached the compulsory retiring age. Her five months term as Matron was a small reward for the loyal, dedicated and distinguished service she had rendered to the hospital over 44 years.

A beautiful looking young woman, tall, slender, blue eyed with dark hair, she commenced training at the Coast Hospital in 1925 and would, except for the gaining of a midwifery certificate, remain at the hospital all of her working life. To avoid being confused with three other nurses bearing the surname O’ Rourke, Mary was known as Nurse Moylan which was her mother’s maiden name. Edith Ellen Moylan, had trained at the Coast from 1898 to 1901 and held Coast Hospital Certificate No 47.

Intelligent, diligent, efficient, quietly spoken with a dry sense of humour, Mary graduated from Staff Nurse to Ward Sister to Sister in Charge of operating theatres, a position she held from 1935 to 1953 when she was appointed Deputy Matron.

An outstanding theatre sister, teacher and manager, the ambidextrous Dr “Cec” Walters and Sister O’Rourke made a skilful surgical team that was inspiring to witness. Trainees would serve at least one theatre term under her supervision. Most nurses regarded her department as a quiet retreat from the raging storms of the wards, an achievement, considering the volatile nature of a theatre complex. She never raised her voice not even when some nervous junior sent a tray of sterile instruments crashing to the floor. Her look of disappointment conveyed more than verbal abuse.She provided an example of excellence that remained as a goal for the trainees for the rest of their lives. She was liked and respected by everyone.

Miss O’Rourke did apply for the position of Matron when it fell vacant in 1955 but was not unduly distressed or resentful when it was awarded to Miss Hope Croll.

Mary was the first to acknowledge Miss Croll’s proven ability in the nursing and hospital administration field. At that point she did not feel she had mastered all that was required in the Deputy Matronship. Mary O’Rourke set high standards for herself, excellence was always the desired goal.

Her personal evaluation of her capabilities was different when Matron Croll retired in 1966. Mary was ready for the responsibilities of Matronship, she had no doubts that she had proved her ability to the governing board and in addition had qualified for the Diploma of Hospital Administration at the University of N.S.W. A course designed for persons unfamiliar and unskilled in hospital administration. She did not need it, her theoretical and empirical knowledge of hospital administration was vast but the course was said to be valuable. She felt confident that the last three years of her working life would be crowned with the ultimate award, that of being Matron of her own and her mother’s training school.

She was shocked, hurt and humiliated when the Board of Directors chose the younger Miss Vera Adderley, one of the Assistant Matrons, who had been at the hospital less than four years.

A private, deeply religious woman, a Roman Catholic, it took all of Mary’s inner strength to continue as the loyal Deputy Matron to Matron Adderley. She did succeed in discharging her duties with competence and dignity, the wide warm smile was not absent for long.

Deputy Matron Mary Jo O’Rourke in her distinctive, powder blue double breasted, starched uniform and white veil, continued to provide in the midst of change, a stabilising image of the nursing ideal for both nurses and patients.

The Board of Directors had not finished humiliating Mary O’Rourke.

In May 1968 Matron Adderley was appointed to the newly created position of Principal Matron (later Director of Nursing Services) of the nursing departments in hospitals controlled by the Board, although each hospital would have its own Matron.

The Board did not appoint another Matron to its biggest hospital, Prince Henry, until November 1968 when Miss O’Rourke was appointed Matron.

It was a discreditable episode. This dedicated nurse did not deserve such shameful treatment. It diminished forever all those involved.

The highly regarded and distinguished Mary Josephine O’Rourke was the 12th Matron of the Coast-Prince Henry Hospital.