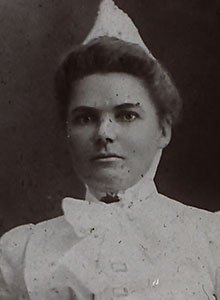 The appointment of Miss Jean McMaster as Matron in March 1891 was a fortunate choice for the hospital and the nurses.

Unlike the previous matrons, she was a certificated nurse from Prince Alfred Hospital where she commenced her training in 1888 and completed it three years later in September 1891. She was immediately promoted to Head Nurse and four months later accepted the matronship of the Coast Hospital.

That was a spectacular rise through the ranks even in those days when the scarcity of certificated or competent experienced nurses could not keep pace with the growth of the health system in New South Wales and the rest of Australia.

She was young, enthusiastic, and her record shows quite determined to raise the standard of the hospital and its nurses to equal that of her training school.

The Prince Alfred Hospital Nurses Training School had commenced when the hospital was opened for public and private patients on 25th September 1882. Fourteen years had been spent in the planning of this new hospital; the cost of construction to the incomplete opening stage had been about £110,000. £40,000 raised by private subscription and £70,000 contributed by the N.S.W. Government.

The Coast Hospital established and entirely funded by the state Government did not even boast a foundation stone or any grand sandstone buildings. Its structures were strictly utilitarian added to when needed and when the government was persuaded to allot funds.

That was of little consequence to Jean McMaster as her horse drawn conveyance passed through the gates of the Coast Hospital and proceeded down the Pine Drive towards the vast expanse of sapphire blue ocean stretching away to a hazy horizon.

On her left were the pavilions of the Sanatorium (the infectious division) to her right, the wide verandahed, corrugated iron pavilions of the general hospital, nurses quarters, kitchen and laundry meandered along the foreshores. Cottages for the doctors and married tradesmen were nearby as well as the ambulance depot and stables.

The “Lock” ward was some distance away from other buildings and she caught a glimpse of the new Lazaret nestling in a valley on the northern side of Little Bay beach.

To the south a road lead along the coast up through the scrub covered sandhills to the hospital cemetery on a distant hill. The cemetery would be in use for many decades to come, more than 2000 persons would be interred before it was left to be partly reclaimed by sand and indigenous scrub.

On that sunny March day in 1891 Jean McMaster’s thoughts were not concerned with the dead, rather more with the exciting challenge in this hospital which was to be her workplace and home for fourteen years.

Little is known about her private life: government reports are not informative but her official letter books are. She emerges from the faded ink on the tissue thin pages as a forceful, articulate, energetic and intelligent woman who was not afraid to speak her mind.

The hospital she took over from popular Matron Helen Mackay was functioning efficiently, despite the makeshift nature of some buildings and equipment. Bathrooms and water closets were attached to most wards although no hot water was connected to wards or quarters; an inconvenience that persist for many years. The typhoid epidemic had subsided although the disease would be endemic in Sydney for many years to come. Other infections vying for centre stage, scarlet fever, diphtheria, measles, whooping cough and erysipelas all of which, in the absence of “wonder drugs,” required dedicated nursing. Only a small number of the infectious cases in Sydney were sent to the Coast at that time. Most patients were in the general division; 1,389 being admitted that year with 46 deaths, a mortality of 3.3 percent.

The workload of the Matron could be overwhelming. Officially she was in total charge of patient care and the nursing staff. She engaged and controlled all the female general staff, cooks, laundresses, maids and also indirectly the wardsmen or male nurses. She issued all stores for the wards and quarters.

As Matron she was responsible for the Female Lazaret and from her letter-books it is also clear that she had the unofficial responsibility of the Male Lazaret. The latter was administered by the Medical Superintendent but as there was a high turnover of medical officers due to various causes, not the least of which was overwork, it became one of her unacknowledged duties.

By far the biggest problem that faced the new Matron was the management of the nursing staff. She had expected some resistance to her methods but not to the degree she encountered from the senior nurses. The extraordinary conditions that existed during the establishment of a general hospital in this remote spot, in addition to the previously mentioned instability of the medical staff, had caused senior nurses to assume an unusual amount of authority and responsibility for medical as well as nursing care.

The senior nurses had been free to manage the wards and their juniors in their own fashion which led to a kind of independent frontier attitude appropriate for the time. Each senior nurse had her own territory where her methods prevailed unchallenged by anyone including the doctors. Jean McMaster acknowledged that they were excellent nurses but mostly lacking discipline.

The first major clash in values between matron and her nurses occurred in 1892. The legislation covering the compulsory detention and care of patients with leprosy had been passed and all sufferers in NS.W. were transferred to the Lazaret at Little Bay. Doubtful cases were placed under observation in a special isolation ward in the Sanatorium (known as the Strong Room) until a diagnosis was made.

One such case concerned a woman who was admitted to isolation with an unspecified condition at the same time as her sister had been admitted directly to the Lazaret. She was not accepted as a patient by the nurses on duty as the I892 Hospital Report explains:-

Some of the nursing staff in the interval declined to attend her wants, an act of insubordination and inhumanity which resulted in one senior nurse being dismissed and another being allowed to resign.

In fact three senior nurses were involved, one was the Head Nurse in charge of the infectious division, Miss Jane McCredie, who after Matron, was the highest paid nurse on the staff, the other two were senior nurses who had been on the staff since 1884.

In 1894 another nurse was dismissed because she “behaved with extreme rudeness to Senior Nurse Inglis.” Elizabeth Inglis, a certificated nurse from Sydney Hospital, had been appointed in 1893. MCMaster commented that she was a very good nurse who “had a very rough time with the Coast nurses.”

On other occasions Matron McMaster vigorously defended her nurses as in this letter written to the Medical Superintendent in March 1895.-

…on 12th March two Coast nurses with my permission drove as far as Botany terminus in the usual evening conveyance together with a nurse who had come to see me on business.

The conveyance went to Botany to bring home a member of the staff who had been on her day off duty. When about to return Driver Coff refused to bring the two nurses home because they had no passes and said he would stay at the terminus all night if they did not get out of the conveyance.

They told him that they had my permission, he replied that the Matron had no authority, that he did not take his orders from her and that Senior Driver McKenny had told him he was not to drive them back and he would not do so.

The nurses after twelve hours duty were obliged to walk back a distance of more than three miles over a rough road in their thin ward shoes reaching the hospital at 9.30 p.m.

Up to the present time the Nurses have not been required to provide passes when they went to Botany only. If Driver Coff has the authority to order them out of the conveyance why did he take them to Botany? Why did he not take them home and then report the matter to you?

The nurses hours are long and their duties very trying. I consider they should have every opportunity given them of getting away from the hospital but if they are to be insulted on the rare occasions they do go out I would recommend some other arrangement be made for them.

Most nurses will experience a sense of déjà vue in relation to this incident. Hospitals can be likened to mini-states with various sub-centres of power and there always seems to be some petty tyrant who makes the nurses the target of his or her aggression. The insularity of the Coast and the difficulty of keeping staff would sometimes provide an ideal climate for the occasional appearance of such a person.