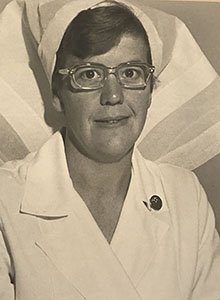 An eighteen year old country girl from the small village of Charbon via Kandos in the rural central west of N.S.W. she had joined the February 1952 P.T.S. prompted by an ambition to travel as well as caring for the sick.

She was not disappointed in her choice of careers or training school. She found nursing absorbing and was regarded in her senior years as a capable as a conscientious nurse-high praise from Senior Sisters at P.H.H.

Four years completed, the newly registered general nurse, travelled westward to South Australia to complete a Midwifery Certificate at the Queen VIctoria Memorial Hospital, Adelaide, then further west as a double certificated nurse to work in the Royal Perth Hospital, West Australia.
In 1958 she recrossed the continent to take a position as ward Sister in the Rylestone Hospital which was close to Kandos and her family home. It was a busy country hospital offering a variety of nursing and other experience. She enjoyed working there.

In 1959 Jean was selected to participate in an Exchange Visitors Programme between Australia and the U.S.A. working fist in obstetrics in Seattle and then surgery in New York, later travelling to Scotland where she enrolled as a student in the Part II section of the British Midwifery Certificate. Jean McKinnon explained:-

I could not register as a midwife in Britain because I had no experience in district deliveries in Adelaide. The Part I midwifery course was six months in a maternity hospital, Part II was six months of home deliveries and after care. Two students delivered the baby supervised by a trained midwife. It was wonderful experience and luckily no mothers or babies were lost, although it served to reinforce my opinion that hospitals are the safest place for both mothers and babies. When I graduated I was employed as a Sister in the private maternity wing at highly regarded Simpson’s Memorial Hospital in Scotland.

I happily returned to Rylestone Hospital in 1962 where I remained until I was awarded a scholarship to the N.S.W. College of Nursing to complete a Diploma in Nursing Administration.

One of my lecturers was Miss Vera Adderley, an Assistant Matron at P.HH, an excellent communicator with a dynamic personality who was largely responsible for me accepting Matron Croll’s invitation to return to P.H.H. as an Assistant Matron in 1966. One of my duties was to keep and upgrade the nursing staff roster system, difficult and time consuming exercise.

As Matron, Miss Vera Adderley expected first class work from her executive staff and got it. Her genius lay in management. She had some revolutionary ideas about nursing administration. She argued that in a system where hospitals were amalgamated under one Board, the nursing department of the two hospitals (it would later be three) should have a central administrator as well as separate Matrons for cach hospital. She also advocated that the trainee nurses should receive their clinical training in all hospitals with the Nursing Education Centre at P.H.H. coordinating their theoretical training.

This was an entirely new training concept in civilian hospitals although it may have been vaguely based on the structure of the Royal Australian Air Force Nursing Service which was created from scratch in World War II. Miss Adderley had been among the first volunteers.

Her plans were approved by the Board of Directors, the position of Director of Nursing Services was created and Miss Adderiey was seconded to the position. The imprimatur of the Board did not guarantee its success. It was experimental and much would depend on the attitude of the matrons and the sisters in each hospital.
I never imagined when I returned to P.H.H. after a ten year absence that I would be appointed Matron on Ist April 1969. I had married Robert Egginton, an engineer, in 1967 and expected that would render me ineligible; not in Vera Adderley’s view, she held that a nurses private life was her own and only of consequence when it interfered with her work. She married Mr Alan Jones in 1972 and continued as Principal Director of Nursing until she retired.

The Board of Directors assured me that marriage was no bar but I hesitated. I did intend to have children which would not fit the traditional pattern of leading hospital matrons who usually became institutions in their own right and remained at their posts until they retired.

The Chief Executive Officer, Mr Clancy, understood my dilemma and resolved the matter by suggesting I take the matronship on a two year contract, renewable if I wished. That was acceptable and I became the first married Coast-Prince Henry Matron appointed this century. Apparently prior to that time ability counted more than marital status.

I think I can claim that my term as Matron of P.HH. was different to that of my predecessors. Miss Adderley was creating a new executive position. The nurses were trained in two hospitals and the course was three years instead of four. Miss Adderley’s office was at P.H.H, she lived in the Matron’s apartment in the McNevin Home and I occupied the Deputy Matron’s unit in the Matron Dickson Home.
Naturally paths of command crossed and clashed at times and although I admired Miss Adderley immensely I did not agree with all her ideas. It was particularly trying for the senior ward sisters who really bore the brunt of changes in administration and training schedules.

Fortunately for me they were loyal and dedicated nurses. I left P.H.H. when my contract expired on 31st March 1971 and within a year I was the proud mother of the first of my two daughters. It had been a great honour to have been Matron of P.H.H. I tried hard not to dim its splendid reputation as a nurses training school and hospital.

1971 The Hyperbaric Unit opens [supsystic-gallery id='11']The concept of a Hyperbaric Medical Facility for Sydney, sited at the Prince Henry…

1971 The Hyperbaric Unit opens [supsystic-gallery id='11']The concept of a Hyperbaric Medical Facility for Sydney, sited at the Prince Henry…