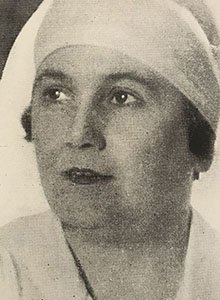 Ethel McNevin assumed the matronship on the 10th of March 1937.

She began her long association with the Coast Prince Henry on 4th August 1915 as a Junior Nurse. She recalled:

I started in Ward 9 a surgical and gynaecological ward, one of the many wards stretching along the shore line. They were corrugated iron and timber buildings. There were times when we had to struggle with loaded trays along windswept verandahs wet with sea spray hurled up over the cliffs a hundred yards away. The new sandbrick Hill wards further away from the shore were in the early stage of construction.

I can remember the excitement when we saw the hospital ship S.S. “Karoola” steaming towards Sydney with the first of the wounded soldiers to return from Gallipoli.

Compared with today our equipment was basic, e.g. all the bed linen was made from unbleached calico. We worked long hours and had four days off each Calendar Month. We made our own amusements.

Then a trip to town by car cost 25 shillings which we could never afford, we travelled by tram. One of the things that really made me feel happy was to be told by my patients that they had missed me very much when I was away on my days off.

McNevin began her training in 1915 at The Coast and apart from gaining a midwifery certificate at “Montrose” Maternity Hospital, Burwood, had served as Staff Nurse, Sister and Assistant Sub-Matron until May 1926 when she resigned from The Coast to become Matron of Coonamble District Hospital.

In 1928 she was appointed Matron of the large Perth Hospital in Western Australia.
Some of the sisters had known her as a tall slim woman with a sense of fun, the Ethel McNevin who returned as Matron was much bigger and more restrained. That she was delighted, excited and a little nervous about returning to her training school as Matron was hidden behind a reserved, aloof facade which discouraged familiarity, although, in her letters to friends in West Australia there was no attempt to disguise her enthusiasm about the hospital. Her nursing credentials were impeccable, it was a challenge to be involved in the upgrading of her training school.

Ethel McNevin took her responsibilities seriously. The death of both parents in her teens had left three young brothers in her care. She was mother and housekeeper to the boys until two were married and the youngest who was disabled, was suitably placed in a residential training school. Only then, aged 25, could she begin her own career.

Matron McNevin was very different to her predecessor Clarice Dickson and would encounter the same hostility from sections of the senior staff as had Jean McMaster in 1891. New ideas on discipline and ward management would disturb entrenched work practices and privileges, causing resentment and conflict.

Her first innovation in July 1937, was to establish a Nurses Preliminary Training School (known hereafter as the P.T.S.). Probationers would not start directly in the wards, instead they would spend two months in the P.T.S. learning the rudiments of medical and nursing theory and clinical skills. It was a short, intensive course in nursing ideology, ward etiquette, anatomy and physiology, hygiene, first aid, bed making, sponging, taking temperatures, efficient cleaning methods and much more. The new probationers practised on a life size dummy (Mrs Bedford,) not live patients, although demonstrations in the wards, weekly tests and a final examination preceded entry to the wards.

The introduction of the eight weeks course meant that intakes of trainees occurred every two months instead of twice yearly or at random.

The conservative Ethel McNevin had some radical notions about the direction of nursing as shown in 1937 when she prevailed upon the Board of Directors to invite the qualified nurse educator, Miss Muriel Doherty, to establish a preliminary training school for nurse probationers at P.H.H.; to reorganise the entire nursing education programme and to train P.H.H. Sisters as Tutor Sisters.

She had tightened discipline, designed a new infectious uniform and had designed a new graduate badge, a silver and enamel brooch, the attractive hospital crest surrounded by a blue enamel circle bearing the inscription “The Prince Henry Hospital, I Serve.”

Her plans for other reforms were shelved during the war. She had a highly developed sense of obligation and duty as evidenced when her parents died and she, then a teenager, assumed their role in caring for her younger brothers until they were adults. That same quality she brought to her nursing career.

Ethel McNevin was ladylike, scrupulously honest, not by nature aggressive, nevertheless she was not prepared to surrender any part of her sphere of influence and that required an attention to every detail connected with her jurisdiction. To most trainees and trained staff her restrained serious manner and immaculate stately appearance made her seem cold and aloof and prohibited any familiarity. Little jokes she made were often missed and any gestures of friendliness rejected because they were not understood as such by those who saw her only as “The Matron.” The patients liked her and felt she really cared about them, which she did.

The companionship of one’s peers which was a rewarding part of the nursing experience was denied the Matron. Off duty she lived alone in her cottage with her spoiled cocker spaniel “Bunty” who accompanied her on daily rounds and was liked by the nurses because he always arrived first. From her perspective the responsibilities of office were outweighed by the challenge of training hundreds of girls to become registered nurses .”The Training” was the foundation on which the expertise and credibility of the nursing profession had been built, it was essential that the course kept pace with advances in medicine, met the ever increasing demands of the Australian health systems and was recognised overseas.

Miss McNevin felt personally responsible for the training of each and every nurse. She interviewed and selected the applicant and farewelled and presented the badge and certificate when the nurse left the hospital. In her pursuit of excellence she was strict and uncompromising with herself and her nurses. This she would sometimes carry to unreasonable lengths, not appreciated or understood by the hapless recipients of her attention.

Ethel McNevin retired on 2nd September 1955 after 19 years as Matron of P.H.H. and 40 years of active nursing service.

At the farewell dinner in the Recreation Room of the new Nurses’ home, which had been named in her honour, many distinguished persons paid tribute to her contribution to the nursing profession and the Prince Henry Hospital in particular. Her coexecutor and sometime adversary, Dr C. Walters, said: “Miss McNevin has lived for her work, to her the care of the sick is a sacred duty…The Prince Henry Hospital is deeply in her debt..”

Within two years of her retirement the hospital redeemed some of that debt as the previously healthy ex-Matron was stricken with a chronic cardiac condition which was relieved but would, from time to time, reoccur without warning.  She was finally persuaded by a concerned Dr Walters and a sympathetic Matron Croll to accept a position as Librarian in the P.H.H. medical library and to live in a flat on the ground floor of the Matron Dickson Home, close to medical aid when needed. Here in the Little Bay environs she loved so much and working as a Librarian in a field she knew well, she quietly and unobtrusively lived out the remainder of her days, surrounded by caring friends, Dr Walters, senior sisters and nurses, members of the medical, domestic, general and office staff, who not only respected this dedicated lady as a nurse and administrator but had over time come to love her. There was a real sense that an era had ended when she died at Prince Henry Hospital in July 1960. Miss Ethel McNevin was the last of the great Matrons in the Coast nursing tradition.

1937 A Preliminary Training School for Nurses is established

1937 The Nurses Preliminary Training School Miss Ethel McNevin assumed the matronship in March 1937. In July she established a Nurses…