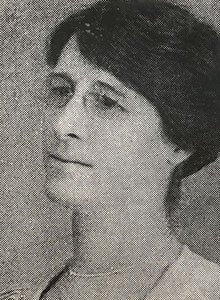 Caroline Maud Burne was the first Coast trainee to be appointed matron on Alice Watson’s retirement in May 1926.

She commenced her training on 16th October 1903 when she was 28 years old remaining on the staff until 1912 when she was transferred to the Public Health Department retuning as Sub-Matron in 1921.

In 1926 the total staff at the hospital numbered 344 persons of which only 80 were men. There were thirteen medical officers. The nursing staff numbered 227, this included the Matron, Sub-Matron, 13 sisters, 16 staff nurses, one housekeeper, 178 pupil nurses and 16 male attendants.

That year there were 10,175 admissions; the number of beds available were 717, the average daily number of beds occupied was 663 and 2,591 operations were perfomed.

Miss Burne was tall and thin. She wore a white uniform and a starched linen English-style cap trimmed with lace; the sisters wore white veils. She immediately dispensed with the horse drawn vehicle for doing rounds, using her own small car instead.

She suffered from asthma but never allowed this to interfere with her work and was therefore less sympathetic than Matron Watson had been to nurses who reported of sick. Mind over matter was a personal tenet.

When Matron Burne’s retired  in February 1936 her farewell function was held in the  Recreation Room in the new nurses home. The Medical Superintendent, Dr Baret acted as host. Towards the end of an evening of musical items, dancing and card games he presented her with some handsome gifts from different hospital departments including one from the staff and patients of the Lazaret. In her “thank-you” speech Caroline Maud Burne recalled starting as a probationer in 1903 when it was not uncommon for nurses to give up their beds and rooms to patients during epidemics and live in tents. Dances and parties were held in the unattractive galvanised iron hall-the new quarters were a dream that had come true at last. She concluded by reminding the nurses that the new environment did not change the main purpose of nursing which was the care of the sick.

After the supper the sisters and nurses formed a guard of honour. The much-admired and liked Miss Caroline Burne walked slowly down the long aisle saying good-bye to each nurse and it seemed that the spirit of unselfish devotion to the needs of suffering humanity that imbued nursing at the Coast flowed around her touching them all.