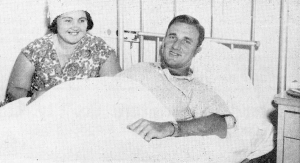 The Police Ward (Ward 20) had its beginnings at a meeting held in the Muster Room of the C.I.B on Tuesday 17 September 1946. The meeting chaired by the Police Commissioner, William McKay, and attended by several representatives of the Police Association, had been convened specially to consider the offer of a dedicated police ward to be established at Prince Henry (The Coast) Hospital Little Bay.

By 1946, Prince Henry Hospital (1881-2003), originally built for the isolation and treatment of infectious diseases, had become a major general hospital. Its Medical Superintendent at the time, Dr C. J. Walters, had submitted a scheme which included the allocation of a “complete” ward containing 40 beds to treat police free of charge.  Attendance was to be voluntary and did not deprive police of the right to consult their own doctor or attend other hospitals. The meeting was unanimous that the scheme be introduced “as speedily as possible.” One month later the ward was opened.

From its establishment the Police Association took a keen interest in the Police Ward. A Hospital Committee was formed and the Association set about raising funds to provide amenities and home comforts for sick police.  At the February 1947 Executive it was decided to collect 2/- from each member and to use the money to purchase bedside lamps and a “mantel wireless” with earphones to each bed.

In early 1948 the Commissioner gave his approval for a fund to be known as the “Prince Henry Hospital Special Purposes Fund”. The fund, which was to provide amenities for the Police Ward nursing staff, was mainly funded by subscriptions from police patients and ex-patients who generally contributed one pound. 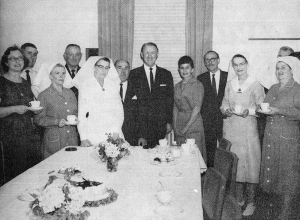 Money from the fund was presented annually in December. Following the presentation afternoon tea was served at a pre-Christmas party in the Police Ward attended by senior police, Police Association representatives, hospital staff, current patients, ex-patients and their families.

In the early years of its establishment the Police Ward was a success with some 837 police receiving treatment between 1946 and 1951.By the mid 1950’s, however,  numbers had begun to dwindle.  Concerned that members were not taking advantage of this excellent medical facility, the Police Association often ran editorials in Police News encouraging police to use the Police Ward and dismissing the perceived remote location of the hospital. Glowing testimonials from ex-patients also appeared praising both the medical treatment and the camaraderie in the ward.

Despite dwindling numbers the Association continued to provide financial and welfare support to the ward including regular visitations. Substantial amounts were spent on renovations such as verandah awnings, partitions and privacy curtains while the Association continued to provide other amenities such as toasters, kettles and a refrigerator.  In April 1973 the Executive also voted to finance the accommodation costs of relatives within the hospital grounds or in nearby motels.

By January 1976, the Directors of the hospital were so concerned about the “under-utilisation” of the Police Ward that they wrote to the Commissioner of Police, Frederick Hanson. Citing economic restraints, the introduction of Medibank and a preference of police to be treated in local hospitals closer to families, they foreshadowed the possible closure of the Police Ward.   Whilst seeing the closure was “extremely unfortunate” the Commissioner acknowledged the economic reality of maintaining a special police ward that was under-utilised, together with his inability to direct police officers to seek treatment at Prince Henry Hospital. Both the Board’s and Commissioner’s correspondence were tabled at the March 1976 Executive with the Commissioner promising to keep the Association informed. By January 1978 the Police Ward had ceased to function exclusively for police. Although police continued to be treated in the ward “from time to time” it became a general ward.

With the ward effectively “closed” the January 1978 Executive voted to donate the remaining Police Ward amenities to the staff of the hospital “in gratitude of the many kindnesses shown by them to their police patients” thus ending an important chapter in NSW police history.

Audrey Tutilm had trained for a year at the Glen Innes District Hospital before coming to P.H.H. in December 1947:

The Police Ward was a favoured assignment. They were great fellows, always pleasant, helpful and cheery. Extra amenities, such as a well stocked tea trolley was provided for them from their own Police Fund. A bonus for the whole hospital was the monthly visit by one of the Police Bands. The Police Scottish Pipe Band was a great favourite

The environment of Little Bay was ideal for that band, the ever present sea breeze carrying the haunting notes around and away. I believe I was lucky to spend the last three months of training as Ward Junior in Medical Ward 19.

Midwives In the International Year of the Nurse we also recognise Midwives. While children and babies were a familiar site…

Midwives In the International Year of the Nurse we also recognise Midwives. While children and babies were a familiar site…

The Sewing Room Originally located on Ewing Avenue, between Pine Cottage and the present day Coast Centre, the Sewing Room…