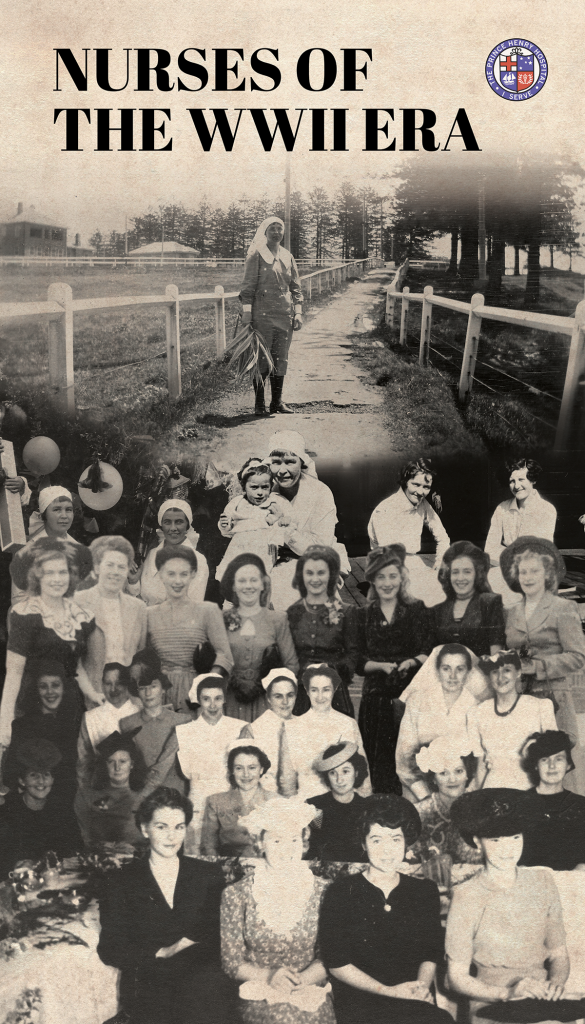 Great Britain declared war on Germany on 3rd September 1939. The Prime Minister Mr Robert Menzies simply announced that as Britain was at war, Australia was at war.

At once the nurses at Little Bay found themselves nursing servicemen not from the battlefield but from the overcrowded induction camps which provided ideal conditions for instant epidemics of scarlet fever, mumps, measles, chicken pox, encephalitis, meningitis and a variety of other diseases.

Military health services were minimal. Prince Henry Hospital was called upon to fulfil the statutory obligation in its incorporating Act, which was to provide 300 beds for infectious patients in the event of an emergency. At times the influx from the camps exceeded this number and in order to keep at least 200 beds for civilian patients every available space was used; eg the old military wards-now called the “Bush”-and all verandahs in the general and infectious divisions.

There is no doubt that the requisition of the whole hospital for military purposes was considered. The Board and the medical administration countered the threat by cooperating fully with the military health services. Thus Prince Henry remained a civilian hospital nursing patients from the services, which put severe strains on the human resources as enlistments continued to deplete the staff.

We were flooded with epidemics. The 6th Division N.S.W. filled our infectious wards with mumps. When the first troopships were leaving Sydney some of our patients who had absconded from the wards were picked up by the military police as they tried to board the ship with their mates. Their swollen jaws betrayed them. We had to comfort them as the convoy assembled offshore in full view of the hospital. The country boys were susceptible to all the children’s infections which were endemic in the city. When the Queensland 6th Division was moved to Ingleburn we had waves of soldiers admitted with mumps, measles, encephalitis and meningitis.

We poulticed mumps patients with the dreaded orchitis-inflammation of the testicle (the “wrong-end” mumps)-set up rectal Glucose and Saline drips when no doctors were available to give intravenous ones and tried hard to stop them developing complications which would keep them in hospital for months.

One of the major problems with Army Admissions was that each patient was accompanied by all his personal belongings and military issue equipment including weapons. American soldiers had enough gear to fill a small room.

All service patients, together with their equipment were off loaded from military ambulances or trucks at the ward. After a batch of admissions the corridors and verandahs looked like abandoned Army disposal dumps. The task of sorting it out, labelling. entering each item in the storeroom book, and fumigating it all fell to the nurses.

In 1940 the Commonwealth Government agreed to provide funds for a new infectious block (the F.W. Marks Pavilion) which was quickly erected but not equipped. It remained unused for 25 years.

Although some sections of the population were involved with the war effort immediately, most Australians were not.  There was surprise and anxiety when Hitler decided to hurry up the war by invading Norway, Denmark, Holland and Belgium in April 1940, followed by the invasion of France when the British retreated from Dunkirk in May.

In September 1940 Gemany began bombing England. Australia watched London burn on the newsreels but made no attempt to prepare for similar catastrophes should they occur in Australia.

Troops of the Australian 6th Division were in action in the Middle East. Many were taken prisoners in Greece before the Army was evacuated to Crete, which was also evacuated at great cost of life and equipment in April 1941.

Sister Sarah Elizabeth Deane M.B.E. (1929-33) enlisted from P.H.H. in 1940. Her courage, competence and optimism during the evacuation of Greece and Crete won the admiration of the Australian troops in her care. They called her “Digger” Deane ever after, an accolade she treasured all her life, more than the decoration she received from the Greek Government after the war. She returned to P.H.H. when demobilised and remained on the staff until she retired She was first and foremost an excellent nurse as well as an outstanding war Supervisor.

Tutor Sister Mary Margaret “Molly” Baxter from Sandy Hollow near Muswellbrook N.S.W. (1933-37) and Sister Marie Vie “Molly” Roche (1930-34) left Prince Henry Hospital in 1940 to serve with the 2nd/5th A.G.H. in Palestine, Greece, Eritrea and Crete and later New Guinea and Morotai. In Greece their hospital was captured by the German Army, patients and staff escaping with the enemy close behind. In New Guinea their nursing skills and compassion was tested to the limit against the dreaded scrub typhus and malignant malaria-both had distinguished nursing careers after the war.

The retreat of the British Army from Europe, the bombing of Britain and latent fears about Japan’s intentions as an Axis partner of Germany and Italy and a lack of confidence in incumbent governments resulted in a change of Government in N.S.W. in May 1941 and in the Commonwealth Parliament in October 1941.

In New South Wales the local member Robert James Heffron, M.L.A. for Maroubra became the Minister of a new Department of National Emergency Services the purpose of which was to organise the civilian population into units to deal with emergencies like the air-raids happening in Britain.

The hospital at Little Bay was in a vulnerable position on the coastline, directly in front of the smoking stacks of Bunnerong Power House, the largest power station in N.S.W. All windows were covered with “blackout paper, street lights “browned out,” air-raid shelters dug in the sand at strategic points, stirrup pumps, buckets of water and sand in every ward and throughout all the buildings.

The war disrupted Matron McNevin’s plans for her training school and increased her concern for the well-being of the young women under her care. The proliferation of military installations around the hospital was a cause for immediate concern. The proximity of so many young men could constitute a source of moral danger to young unsophisticated girls who had no family support in Sydney. She spent some sleepless nights worrying about drunken parties, or the rape and seduction of the innocent young nurses.

The only solution seemed to be to increase discipline in the wards and supervise the off-duty activities as far as possible. A responsible and cooperative gateman was an essential requirement. He reported to her daily with the late pass book and would mention any unseemly behaviour by the nurses such as being intoxicated.

More serious than socialising nurses and soldiers were the games being played with the hospital by the Amy. Matron protested long and bitterly when the Army requisitioned land near the beach and installed the 120th Special Hospital for servicemen with venereal diseases in the abandoned old Coast Wards. Most of the patients were mobile and wandered around the hospital grounds.

The activities of Japanese submarines offshore e.g, the sinking of iron ore carriers off the N.S. W. coast caused the Army to consider moving the hospital from its vulnerable site. Rumours of possible evacuation of the hospital had been circulating ever since the Japanese entered the war. All nurses had their blood typed and were asked to put their Blood Group together with their name and address on a disk to be worn somewhere on their person, some wore the disk on a chain around their neck, others pinned the disk to their underwear. In January 1942 the hospital was given notice to prepare for evacuation, when and where to was not disclosed. Speculation was rife,-Kenmore Hospital in Goulbun, the Blue Mountains, etc. The infectious division was partially closed down, patients in the medical and surgical wards reduced. The operating theatres remained open as did other essential services e.g. outpatients, kitchen, laundry, etc. Nevertheless there was more staff than needed in all departments.

Although Bunnerong powerhouse continued to smoke like an active volcano P.HH. stayed at Little Bay, normality returned. The evacuation order was lifted in May 1942.

An event that would have far-reaching effects on the nursing profession in N.S.W. was the founding of the N.S.W. College of Nursing in Sydney in 1949.

In N.S.W. the standards of nurses training schools were high, their state registered certificates were accepted unconditionally in Great Britain and elsewhere but unlike Britain there were no specialised post graduate courses available from properly accredited institutions anywhere in Australia. The Colleges of Nursing, managed by nurses, would address this imbalance in nursing education.