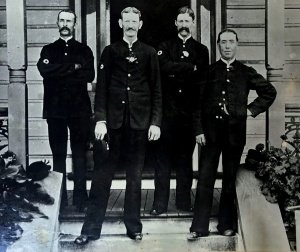 The ambulance service maintained at the hospital at this time comprised six ambulances, twelve horses, and four drivers. The cost of this service for the year was about £1,136. It was the only complete ambulance service in the colony, “ready at a moment’s notice for use in case of an epidemic of infectious disease and it performed in addition to the ordinary services for the Coast Hospital much useful work for the metropolitan hospitals and the Asylums for the Infirm”. 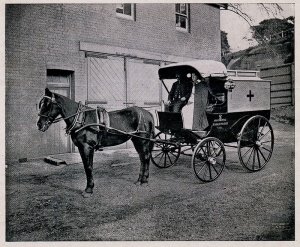 lf a medical practitioner from Gordon, for instance, telephoned requesting the urgent admission to hospital of a patient suffering from typhoid fever, the Superintendent of the Coast rang the ambulance quarters and gave the ambulance man on duty the relevant details. He harnessed the two horses to the horse ambulance and drove down to the Coast area. The nurse on “ambulance duty”, already alerted, was ready with the emergency medical basket containing the necessary drugs and equipment.

Together they drove in the ambulance the twenty miles to Gordon and arriving at the patient’s home, the nurse helped the ambulance man lift the patient onto the stretcher and load it into the ambulance. She nursed the patient during the exhausting return trip over sandy rutted tracks, down stony inclines and often through creeks which in wet weather became flooded and treacherous. The harbour was crossed on the horse ferry either from McMahon’s Point to Dawes Point or from Milson’s Point to Benelong Point. From suburbs out Ryde way, the horse ambulance crossed Lane Cove Bridge (1881), Gladesville Bridge and Iron Cove Bridge to Glebe Island or Pyrmont Bridge (1857) then followed Harris Street, Cleveland Street and continued on out through Moore Park following the Bunnerong Road, here traversing uninhabited scrub country bordering swamps and marshes alive with snakes.

The Coast Hospital in those days was in every sense an isolation hospital – an oasis of humanity in a wilderness not without its beauty, especially on the coast itself. 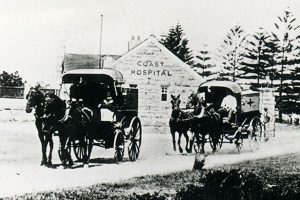 After such a journey, the stone lodge and entrance gates at the top of the stiff rise and the straight sandy hospital road bordered with the young pine trees, were indeed welcome sights. From the high ground could be seen the magnificent sweep of wild country down to the rocky cliffs at Little Bay and the roofs of the Coast Hospital buildings below near the sea, shimmering in the sunlight.

With home in sight the horses quickened pace and had to be checked by braking down the steep descent at the Healthy Ground, one of the stretches of road later reconstructed “at easier gradients than the old ones, thus lessening the wear and tear on the horses” (Annual Report, 1903).

Wear and tear on the men was also a consideration as it was not an infrequent occurrence in the early days for a sick patient to arrive at the hospital on a hand litter, having been pushed four or five miles along the lonely sandy tracks from Botany.

Behind the statistics of the Board of Health reports for those years, many epic ambulance journeys and many stories of family tragedy; of chidren dying of infectious diseases, many of which today are readily cured by the antibiotics, and of young parents carried off with typhoid fever.

Miss Dickson, who started training at the Coast Hospital in 1909 and was assistant matron and then matron in 1936 and 1937, said that ambulance duty tor young trainee nurses was quite an ordeal, this often being the first time they had come into contact with real squalor and destitution. She clearly remembered her first call on ambulance duty to a desperately ill child choking with diphtheria, which was rushed to the Children’s Hospital where an immediate tracheotomy was performed.

On another occasion, with the horses galloping at top speed and the foot bell clanging, the ambulance careered across the Pitt Street intersection against the traffic policeman’s halt sign, taking a seriously ill woman from Church Hill along King Street to Sydney Hospital.

Many roads in Sydney and its suburbs at that time were little more than stony, rutted tracks, particularly the road to La Perouse which, for many years caused much suffering to ambulance patients. Despite repeated requests by the hospital authorities for its repair, little was done until the day the State Director of Health was taken in an ambulance to the Coast suffering from an attack of renal colic. Within a very short time, the road had been improved almost out of recognition.

Next Up
Copied!
Next Up
Previous