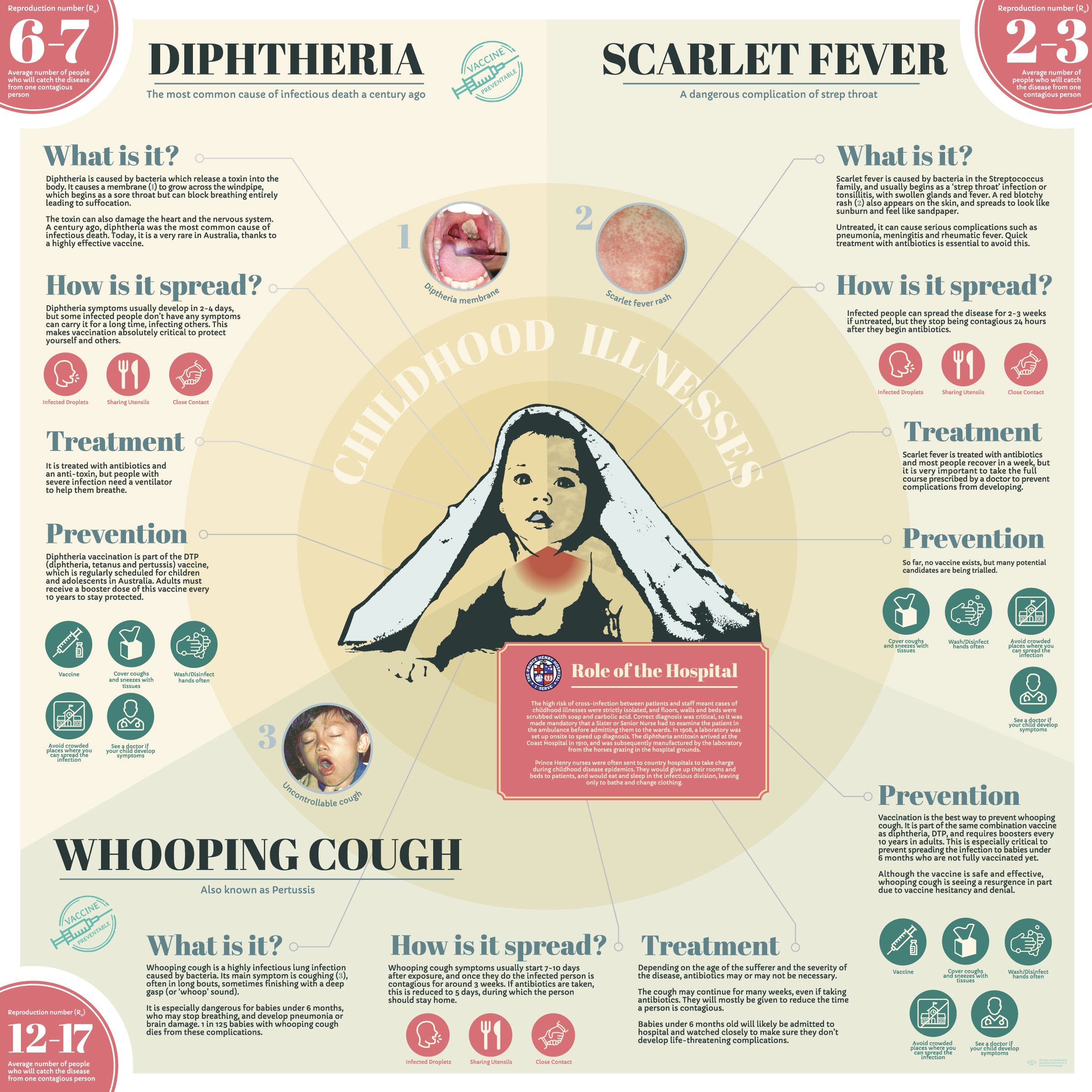 Pierre Bretonneau of Tours in 1826 was able to draw clinical distinction between diphtheria and scarlet fever, and gave the former its name; the word “diphtheria” is derived from a Greek word meaning “skin” or “membrane”. A disease which probably was diphtheria was observed in Spain and Italy in the 1600’s, and it spread through Europe the following century. Since those times the disease has been one of the important causes of childhood mortality, until comparatively recently.

Diphtheria and other childhood infectious diseases, whooping cough, Scarlet fever and measles, were relatively recent newcomers to the Australian continent. “Croup” was recognized in this country somewhere between 1827 and 1842 and it fluctuated in incidence from year to year, causing some deaths. It is not certain whether this “croup was of diphtheritic origin or not, and many of these cases were probably due to organisms which cause croup at the present time.

That diphtheria did occur in October 1858 in this country does not seem to be in doubt, and the State of Victoria was the first affected, probably because this was the State to which most of the English immigrants went. As the journey from England took three to four months it seems very likely that those people who left England in the June of 1858 when the disease was very prevalent there, brought it with them. Following this date, deaths from croup and diphtheria were registered each year.

In 1883 Edwin Klebs, a pupil of the renowned pathologist Virchow, described the diphtheria bacillus and the following year Friedrich Loeffler, a Prussian and an assistant of Koch, cultivated the organism. This led in 1894 to the production by Emil von Behring of an anti-serum, the frst mention of which in Australia was made in 1895 in the retiring addresses of the presidents of both medical societies in Victoria (the Victorian branch of the B.M.A. and the Medical Society of Victoria) and Springthorpe (1895) was the first to record the use of anti-serum in the treatment of diphtheria in Australia.

Toxin-antitoxin mixtures were first used for the active immunization of man in 1913 by von Behring, but the development and widespread application of this measure were due largely to the efforts of Park and Zingher in America during the 1920’s and 1930’s. The diphtheria immunization campaign in New South Wales was launched in 1936, and resulted in a marked decline in the annual numbers of cases.

The year 1923 saw the introduction of the Schick test to determine a person’s susceptibility to the disease, and those who were shown to be susceptible were subsequently immunized. The effectiveness of active immunization against the disease is illustrated by the fact that admissions of diphtheria to the hospital have fallen dramatically. Seven hundred cases of diphtheria were admitted to Prince Henry Hospital even as late as 1942-3 but during some recent years there have been none. Diphtheria still lurks in the community, however, and every now and again attacks a child or adult who has not been immunized. Every parent has the grave responsibility of ensuring that his children are given protection against this dangerous condition.

The annual reports of the hospital recorded for each year the number of intubations and tracheotomies carried out on diphtheria cases during that time. The medical and nursing care of such patients was of critical importance. Not only were there the risks of respiratory obstruction to be dealt with, but occasionally when a sick child or adult had been nursed safely through this phase, a diphtheritic carditis’ developed, which meant weeks of complete rest in bed and which sometimes caused the sudden death of the patient. Fortunately this picture is one which is now seen much less frequently. It could be eliminated.

Scarlet fever, which was first recorded in Europe about 1650, according to Cunningham was unknown in Australia in 1827. It was frst recognized in New South Wales prolbably between 1840 and 1850, although there is some doubt about this, and it was noted then to have “a high mortality among the native-born population. Hirsch (1883) in his Geographical and Historical Pathology stated that “scarlatina reached Australia and Polynesia first in the beginning of 1848; the disease broke out almost simultaneously in Tahiti, New Zealand and Tasmania, but everywhere to a limited extent and in a very mild form”. It appeared afresh in 1853, and by 1860 it was well established in every State. Mofitt in 1874 wrote of the heavy incidence of scarlet fever and the carelessness regarding the isolation and hygiene of sufferers and fomites. Epidemics were in some cases caused by infected dairy milk.

Over the years, considerable fluctuation in the virulence of the disease occurred spontaneously for no obvious reason; this presumably has to with the organism itself. Since 1889 the death rate at the Coast Hospital from this disease has varied from 0 to 6 per cent. Prior to 1889 there is no doubt that on occasions the death rate was much higher.

In recent years antibiotics have had a profound effect in reducing the severity of inflammation of the heart, due to the disease, its frequency in the community and the complications. Probably the high mortality rates from scarlatina in the 1800’s in Australia were partly due to the appearance of the disease in a relatively non-immune population, although at that time the condition was associated with a high mortality rate in countries where the disease had been endemic for many years. In fact during the years 1837 to 1884, scarlet fever was one of the great killers, especially in children, and this applied not only to Australia.

These days the majority of cases of scarlet fever are treated at home by the family doctor with one of the antibiotic agents; another scourge of mankind has been tamed but is unlikely ever to be completely eliminated from the community.

While considering the question of the varying virulence of Streptococcus haemolyticus which causes scarlet fever, mention should also be made of erysipelas, an angry spreading skin infection due to the same organism. Although admissions to the Coast Hospital with this condition were not as numerous as those of scarlet fever, there were from fifty to two hundred cases a year up until the time of the Second World War, with a death rate on occasions approaching 15 per cent. This condition is quite uncommon in recent years and when it does occur, it responds well to antibiotics.

The story of whooping cough parallels that of the preceding infections in many respects. It was described in 1578 by Guillaume de Baillou and was rampant during the eighteenth century in Europe. The disease appeared in New South Wales in March 1828, having been introduced by the ship Morley which, it is said, carried convicts from England.

The disease swept through the colony uncontrollably, carrying off many people, young and old alike. Among these was the son of Governor Darling. As might also be expected, the death rate among the aborigines was very much higher than among the white population because of the high incidence of chest complications.

The disease was very active during the years 1858 to 1874, occurring in explosive outbreaks every three to four years, and there were also major epidemics in 1878, 1899 and 1907. As with the other fevers, a steady fall in the mortality rate occurred with the passing years. In 1909 the death rate in South Australia was no less than 20.6 per cent of cases of whooping cough, and even as late as 1929 there were eleven deaths among seventy-nine cases admitted to this hospital. After this distressing year the disease declined in frequency and severity.

Whooping cough is still dangerous to very young children in whom it is a most distressing disease and it is this age group that requires the protection afforded by immunization.

1920 Coast Hospital develops quickly [supsystic-gallery id=21]DURING the 1920's the entrance gates were located beside a little sandstone lodge. The…

1920 Coast Hospital develops quickly [supsystic-gallery id=21]DURING the 1920's the entrance gates were located beside a little sandstone lodge. The…