Anne Thompson graduated in Nursing at Prince Henry Hospital in 1965.  These are her recollections of her time in training. 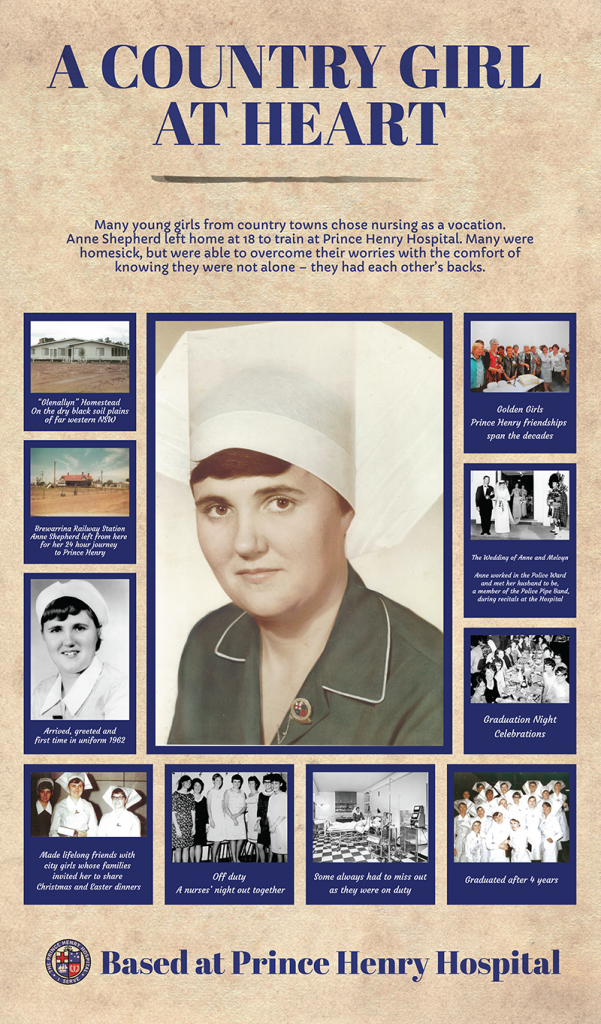 As the 1960s commenced, the infectious diseases that had filled the wards of Prince Henry Hospital for 60 years succumbed to power of immunization.

Prince Henry became a teaching hospital for the University of NSW and saw an influx of young and enthusiastic medical and nursing practitioners, including many from abroad keen to explore new frontiers.

In 1962 a large well-equipped School of Nursing opened on Pine Avenue. The theory component of nursing was now taught in 6 week blocks and no longer done in off duty time. All subjects were examinable and all exams had to be passed for the nurse to progress to the next year of the training. Time spent in study was the student’s responsibility.

In March 1962, my cohort commenced with 37 girls–the largest number to start training as a group at the hospital. 4 years later, 21 of us would graduate.

The first weeks in Preliminary Training School (PTS) were startling for all of us. We were not only instructed in basic nursing and formal etiquette, but also subjected to a series of injections–vaccines for typhoid, polio, smallpox and other infectious diseases. We lived in the Nurses home and were warned not to marry if we wanted to complete our training. We each received 4 pounds a week, from which board and lodging, our superannuation and the hospital fund was deducted.

During our training the hospital was being refurbished and so we were required, as part of our training, to clean and prepare the new respiratory unit for an influx of polio patients. At that time, it was said to be the best respiratory unit in the world and represented the beginning of modern Intensive Care Nursing. New operating theatres were also opened and the Pathology building was extended during this period. It’s arguable that the clinical departments would not have been established so quickly without the dedication and the labor force of the trainee nurses.

In 1964 there was an outbreak of gastroenteritis. Many of those worst affected were children. The Marks Pavilion, in the infection disease unit, was bulging at the seams–it was remarkable how quickly the hospital could expand. Children were admitted from all over Sydney. Some of the poor little pets were dead on arrival. We dragged beds, borrowed cots and humidicribs into the ward. Special nurses were employed to cope with the overload. It gave us a vivid picture of how our predecessors at the Coast Hospital had managed earlier epidemics.

As the training years progressed nurses had to take more responsibility for patient care, and in the evening and on night duty, the senior nurse was responsible for  care of the whole ward, 40-60 patients. A roaming registered Sister was available to call in an emergency. Our night sister, Sister Fisher, was known as “Fairy” as she had the happy knack of arriving in a ward without a sound. Walking along the roads between wards, she was regularly followed by several stray cats, which she would feed.

Trainee Nurses were encouraged to become active in the Nurses Student Union, which was based on the University Union. This promoted fellowship, social and cultural activities between hospitals.. With Matron Croll’s approval, we organized the first a Woolshed Dance, which was made even more memorable by some University students spiking the watermelon punch with pure alcohol. We all danced and danced!! We also entered a team in the Inter Hospital Swing Carnival at Bankstown. We had some difficulty finding the Venue, but came second in spite of that.

There were constant changes during our training: Our uniforms were changed to short sleeves, our caps lost their divots and gained blue stars. We were able to purchase long blue capes, in lieu of the issue short ones. The Dining room changed from wait-staff to self-serve, which wasn’t as nice but was much faster.

In 1965, several of us were lucky enough to nurse the first kidney transplant in Australia back to health. We also had the privilege of witnessing the miraculous change in small blue babies after heart valve replacement surgery.The Psychiatric ward also opened in 1965 and general trained nurses were welcomed to train in caring for psychiatric patients.

Final exams were done away from the hospital. It was traditional for the undergraduate class to serve breakfast to the examinees, then Matron Croll wished us well as we departed in the hospital bus, driven by Stan, who kept everyone’s spirits up. There was also a day of oral examinations for both medical and surgical, which were necessary to pass for registration.

In 1965 the graduation ceremony was held at the Science Theatre at the University of NSW, for the first time. My 1962 cohort were the senior class at that graduation, which also now included Prince of Wales Nurses, who had joined the Prince Henry nurses for their lectures at the Nurses Education Centre. Our four years of training had come to an end. While our training days were mainly happy ones, there were some rocky patches–resentment of perceived injustice and so on–but we sustained each other and matured together.

The work was hard and constant, the study intense and incomprehensible at times, but it was balanced by off duty relaxation. Our finances were limited but there were plenty of recreation facilities at Prince Henry which cost nothing. The beach, tennis, golf, walking and, of course, enjoying each other’s company.

As nurses at Prince Henry Hospital we had many unique situations to contend with.

We were all aware of the presence of the Lazaret, a residence for people suffering from leprosy. It had been on the hospital grounds since the establishment of the Coast Hospital in the 1880s. Mostly the inhabitants kept to themselves, receiving regular checks from Dr Symington.

With its proximity to Long Bay Jail, Prince Henry Hospital staff cared for both police and prisoners, but in separate wards of course. The Police Military and Pipe Bands visited once a month and played outside the Police Ward for most of the afternoon. The musicians then had afternoon tea with their comrades in the ward. One gentleman also visited the Police ward most nights, offering warm roasted chickens to assist with the appetites of the large framed policeman.

The prisoners were put to work baking bread for all the wards. They also grew vegetables for the kitchens and made linen bags for the staff.

During the 1960s clinical procedures and equipment changed dramatically. The 24 hours of the day were divided into over lapping shifts. Relieving nurses were expected came on duty early to get patient handovers, so the outgoing shift could leave on time. The use of plastic equipment proliferated, and drugs for injections now came ready mixed in vials.

We all had our favourite ward sisters, such as Digger Dean, Fran McCloud and Jo Loader. They all ran tight ships and were excellent teachers.

Although the Polio epidemic was over by the end of the 1960s, several paralyzed patients were still cared for in iron lungs in the respiratory unit. In time these patients were rehabilitated enough so they could live at home, but they still had to spend most of their time inside the bulky iron lungs that helped them breath.

1969 saw the first male nurses begin their training and the General Nursing course go from a 4 year to 3 year training regime.

Curiously, the appearance of a phantom known as “Gracie”– said to be the ghost of Sister Gracie Andrews, a nursing sister who worked at the hospital in the 1940s–also began around this time, but has no rational explanation. There appears to be no evidence of resident ghosts before then, although Little Bay has always been an eerie place on windy nights, with rattling windows, shifting shadows and those moaning pines.

Training and working as a nurse at Prince Henry Hospital was a privilege and a pleasure. Although we have lost many of our classmates to illness, the bonds we formed were never broken and still exist to this day. 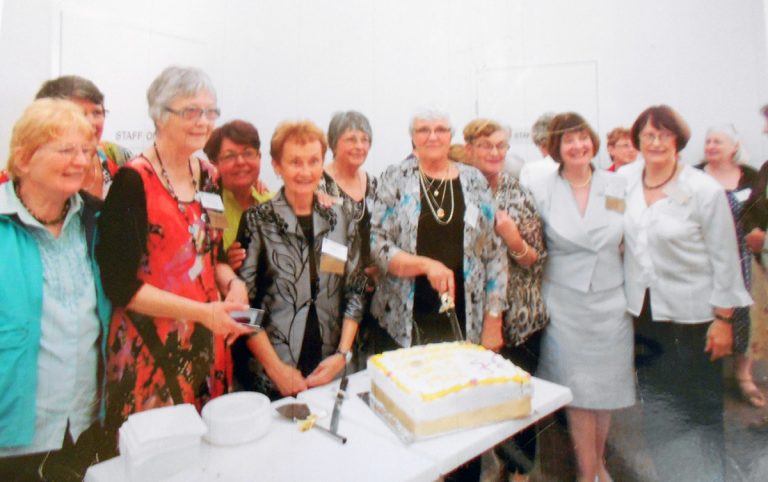 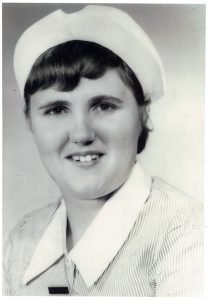 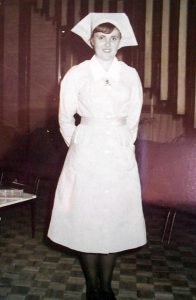 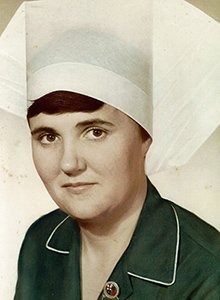 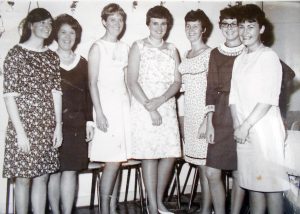 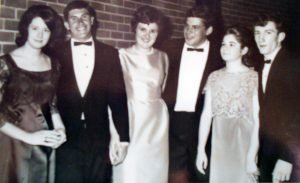 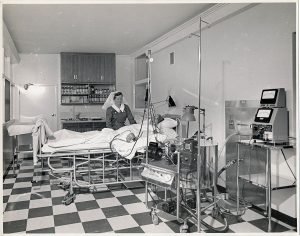 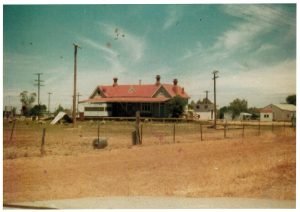 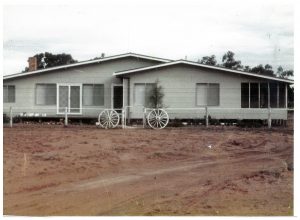 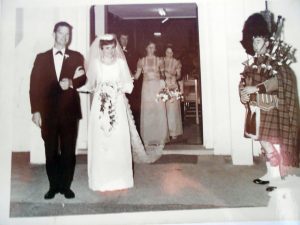