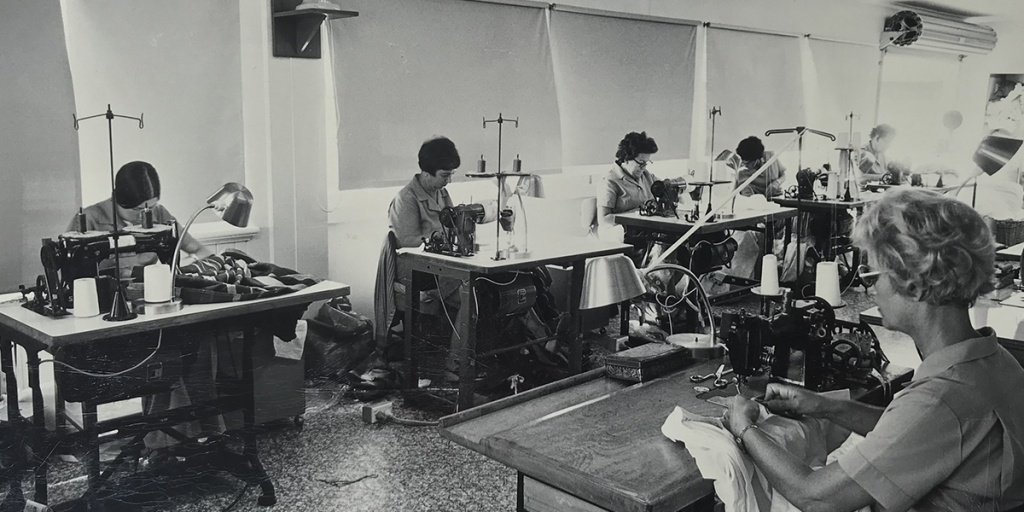 Originally located on Ewing Avenue, between Pine Cottage and the present day Coast Centre, the Sewing Room began its active life in the 1890s. As its name suggests, The Sewing Room dealt with all things related to textiles for the hospital, from the making of bed linen–such as pillow cases, draw sheets etc–to general repairs to staff uniforms and the manufacture of some nurses’ uniforms. Eventually all nurses uniforms were made on site.

In the mid-1960s the Sewing Room was relocated to Lister Avenue. Sadly, that building burnt down during the early stages of Prince Henry’s redevelopment. In its place today, set on a picturesque viewing corridor facing the golf course and the ocean, is a stylised sculpture depicting a treadle sewing machine. The sculpture commemorates the building and the efforts of those who worked there. The inscription refers to the Sewing ‘Cottage’, though those who worked in the hospital still fondly remember the Sewing ‘Room’.

Adapted with permission from The Sewing Room by Jane Bannister on the Prince Henry Community Website.

Winnifred C Giles began her career at Coast Hospital as a trainee nurse but became Head Seamstress. She worked at the hospital for 44 years, from 1925-1969. When new trainees were accepted into the nursing school they would be sent to the sewing room to be measured for their uniforms. 3 months later, when they started, 3 uniforms would be stiff and neatly folded in a drawsheet on the end of the bed in the nurses residences. They always fitted.

The Evolution of Nurses Uniforms

Matron McMaster introduced an official nurses’ uniform in 1894, when she established the Coast Hospital Training School for Nurses. The trainee nurses, were sent either to David Jones or Farmers, in the City of Sydney, clutching a swatch of material and with a letter from the hospital, to have their uniforms made.

As Maylean Cordia describes in Nurses at Little Bay:

Matron McMaster ranked the requirements of the nursing staff almost equally with the efficient management of patient-care. She was teacher, friend and advocate and where the style and type of uniform was concerned she required the skill of a dress designer to please her clients, the nurses and maids.

Initially the nurses uniforms comprised two striped cotton twill dresses and two navy blue serge woollen dresses, (one of which was an outdoor uniform,) a straw bonnet was also supplied. Over the dresses went the long aprons of white Horrocks’ calico. The same material was used for detachable cuffs, collars and belts. Gold and silver brooches and buckles were permitted. The pretty “jelly mould-type” caps that perched on shining “cottage loaf” hairstyles and tied under the chin were of lawn or muslin. A floor length black merino cape and a waterproof long Macintosh cape completed the uniform.

Matron McMaster considered that the woollen dresses were unhygienic, particularly for infectious nursing and changed the requirement to four cotton dresses and one outdoor woollen dress.

When it was decided to designate Head Nurses as Sisters and senior nurses as Staff nurses, new uniforms were required to distinguish the various rankings.

The maids wore different colours according to their duties.

Uniforms were fashionable in the third decade of the twentieth century. All big successful enterprises provided their workers with smart clean uniforms, They gave a touch of glamour to repetitive factory work, an efficient clean image to food outlets like milk bars or hamburger stands and an air of opulence to hotels, theatres and restaurants. There was no doubt that uniforms created an impression of order and authority which made ordinary people look professional and attractive.

That was not the case with the new infectious uniform introduced by Matron McNevin, a straight loose dress with short sleeves, an open neck with a flat self collar, pockets and a narrow self belt. The fabric was cotton “Caesarine” and the colour solid pink.

It replaced the even more unattractive loose straight collarless short sleeved Holland fabric gowns. The softly starched lawn cap called the “onion bag” which covered every strand of hair was not changed.

The nurse was required to change out of her ordinary uniform in the change room when she came on duty and change back when she left the ward. The infectious uniform hung on one side of the room and the clean uniform on the other.

The infectious uniform had many advantages and it was easy to work in. The uniform did not become too bulky if the nurse put another gown over it when attending a different infection, sleeves did not have to be rolled down and cuffs put on when the hierarchy appeared. Regrettably, the uniform did not flatter the wearer, only a slim nurse with a beautiful face could hope to look faintly attractive in this “starched sack tied in the middle” garment.

An excerpt from an anonymous contribution in the 1940 edition of the nurses magazine “Coast Chronicle” gives the general opinion on the gown. The verse was a parody of a song from the musical comedy “Irene” and was titled “Alice Pink Gown.”

In my dear little measly-pink gown,
Do you wonder I feel like a clown?
It’s sizes too large, I feel like a barge
As at everyone’s bedside I pause with a frown.

For the fellows all thought it a lark,
But their wise cracks did not miss their mark
Even though I then wore it, I’ll always abhor it
My terrible “pink giggle gown”.

The trainee’s initial expense was her uniform. These could be made up at home or purchased in certain big department stores e.g. Farmers and Company. The whole outfit including stockings and shoes, and extras such as a watch, surgical scissors and text books, cost around £20 to £30 or more, a large outlay of funds. Uniform replacement would be borne by the hospital but as the original trousseau was of excellent quality and of sufficient quantity to last nearly four years, replacement was seldom necessary unless one grew out of the uniform.