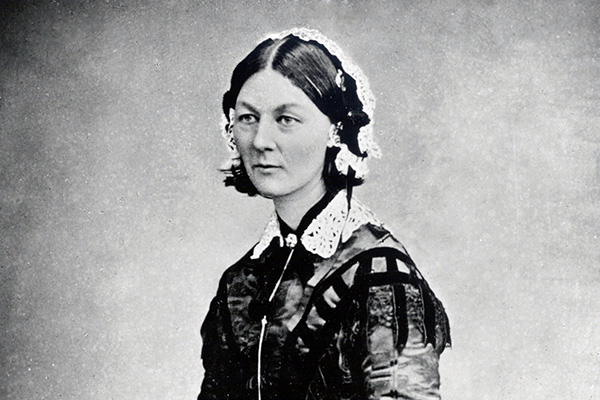 Florence Nightingale is considered the mother of modern nursing but her career went far beyond compassionately ministering to the sick.

Born in Florence , Italy, in 1820, and named for the city of her birth, Nightingale defied her parent’s to train as a nurse, foregoing the traditional role of wife and mother expected of her. While she is reputed to have had many intense relationships with men, she never married. Some academics believe she eschewed intimate relationships because she felt a religious calling to her career. Nightingale did maintain a close friendship, later in life, with Irish nun Sister Mary Clare Moore, who she had worked with in Crimea

Nightingale traveled widely with her family as a child, and on her own as an adult. She wrote passionately about the world she observed. In Rome, in 1847, she met Sidney Herbert, a politician who in the previous two years, had been Secretary at War, and his wife. Herbert and Nightingale forged a lifelong friendship, and she became a key adviser throughout his political career.

In 1850, while touring Germany, Nightingale visited the Lutheran religious community at Kaiserswerth-am-Rhein, where she observed Pastor Theodor Fliedner and the deaconesses administering medical care to the poor. She received four months medical training at the institute and regarded this experience as a turning point in her life. Her time there was the focus of her first published work, The Institution of Kaiserswerth on the Rhine, for the Practical Training of Deaconesses, etc., published anonymously in 1851.

Reports reached Britain detailing the horrific conditions for the wounded. On 21 October 1854, Nightingale and a contingent of 38 volunteer nurses she had trained, plus 15 Catholic nuns mobilised by Cardinal Manning, Archbishop of Westminster, traveled to the Ottoman Empire. They were deployed about 295 nautical miles (546 km; 339 mi) across the Black Sea from Balaklava in the Crimea, where the main British camp was based.

When she arrived early in November, she found wounded soldiers being poorly cared for by overworked medical staff, battling official indifference. Medicines were in short supply, hygiene was sorely neglected, and mass infections were common, many of them fatal.

She reorganised the hospitals and improved supplies of food, blankets and beds. She increased standards of hygiene and cleanliness. The comforting sight of Nightingale checking all was well at night earned her the nick-name ‘Lady of the Lamp’, along with the undying respect of the British soldiers.

Nightingale initially believed high death rates were due to poor nutrition, lack of supplies, stale air, and overworking of the soldiers. But when she returned to Britain, and began collecting evidence for the Royal Commission on the Health of the Army, she came to the conclusion that most of the soldiers at the hospital died because of poor hygiene and substandard living conditions. She began to advocate for more sanitary living conditions for soldiers, which substantially reduced peacetime deaths in the army. She then turned her attention to the sanitary design of hospitals and the introduction of sanitation in working-class homes.

In 1860, Nightingale laid the foundation of professional nursing with the establishment of a nursing school at St Thomas’ Hospital in London. This was the first secular nursing school in the world, and is now part of King’s College London. In recognition of her pioneering work, the Nightingale Pledge is taken by all new nurses, and the Florence Nightingale Medal is the highest international distinction a nurse can achieve.

Nightingale displayed a strong aptitude for mathematics and was a pioneer statistician. She used data visualisation and infographics to more effectively communicate statistical information to public servants and politicians, and in doing so changed public policy in the UK, and arguably across the globe.

Besides improving healthcare and sanitation for all sections of British society, Nightingale advocated for better hunger relief in India, helped to abolish prostitution laws that were particularly harsh for women, and expanded opportunities for female participation in the workforce.

Nightingale was a prodigious and versatile writer. Much of her published work covered medical subjects, but she also had an intense interest in religion and mysticism, with some writings on these subjects being published posthumously.

Florence Nightingale’s nursing philosophy was brought to Australia in 1868 by Lucy Osburn, a Nightingale trained nurse, at the behest of Sir Henry Parkes. She arrived in Sydney with five other Nightingale nurses to set up a training school based at Sydney Hospital.

Osburn’s time at Sydney Hospital proved to be quite difficult. She faced constant criticism from the resident surgeon, Alfred Roberts, and fell out with Nightingale herself, over whether or not she was adhering to Nightingale standards in her practices. Osburn ultimately resigned from her position in 1884. Despite this, Osburn successfully trained many Nightingale nurses and successfully established the Nightingale focus of cleanliness, sanitation and fresh air and adequate food in Australia.

1881 Smallpox outbreak in Sydney In 1881 the child of a Chinese merchant, On Chong, became ill. It was not…